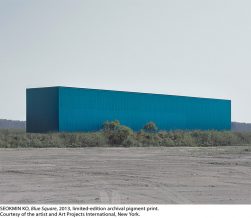 Seokmin Ko’s “Strip Show” proved that minimalism, for all its purity, can still play tricks on the eye. For his second U.S. show, this Korean photographer exhibited six works from the ongoing series he began in 2013, starting with Blue Square (2013), a photograph of a cobalt-blue storage unit set in the middle of an overgrown field. The imposing, windowless structure looks as if it has been Photoshopped into the scene in such a way that it is like an impostor in the calm environment with its cloudless sky and flat topography. Yet the image has not been manipulated, and there are tire tracks in the dirt road in front of the tank to prove that humans have been there.

People never appear in the artist’s tightly composed photographs, causing the pictures to resemble utopian vistas rather than images of Korean urbanity. As an example, Seoul Square (2014), with its absence of cars or trains on the overpass through the cityscape, looks less like the South Korean capital than the concept for a Steven Spielberg film set in the distant future.

Ko’s sense of scale and composition is the mark of a patient artist—the kind of photographer who waits for an image to reveal itself rather than seeking it out. Likewise for the viewer. Looking at Ko’s work is a kind of meditative act. The complexity of these photographs became obvious only after prolonged observation.