“Hidden Presence in ‘The Square’” by Larry Frum 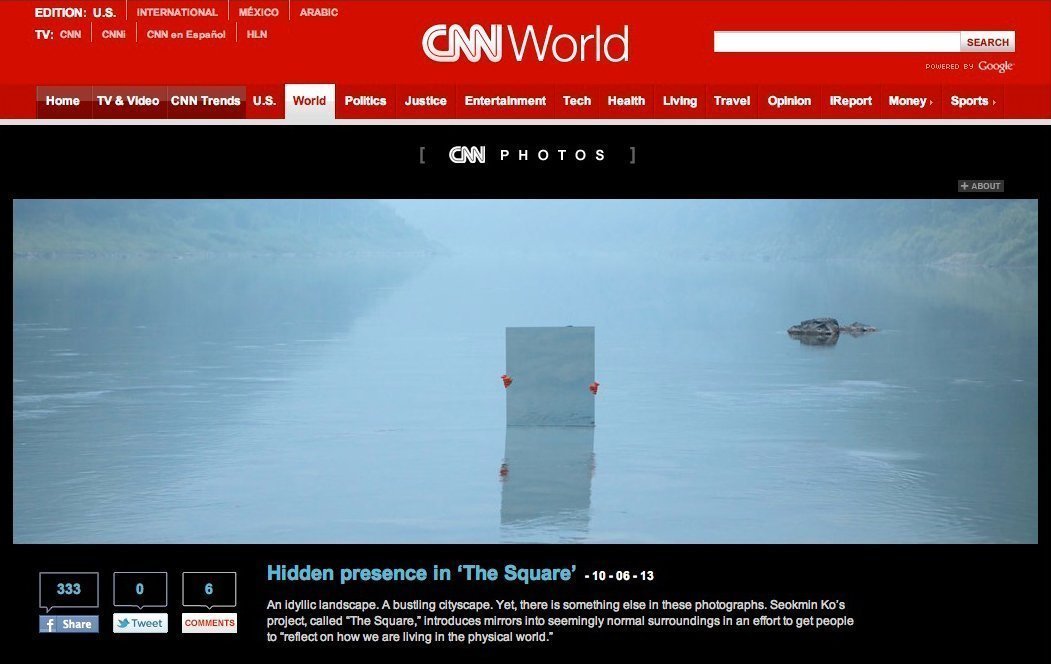 An idyllic landscape. A bustling cityscape. Yet, there is something else in these photographs.

Most imperceptibly, two hands hold up a mirror reflecting a bit of the surroundings and still becoming a part of the overall scene.

Photographer Seokmin Ko’s project, called “The Square,” introduces the reflective surface into seemingly normal surroundings in an effort to get people to “reflect on how we are living in the physical world.”

“Since a mirror will reflect reality and at the same time reality seen in lateral reverse (or right symmetric), I thought there was an inherent double meaning,” he said. “One’s presence doesn’t have to be reflected in the mirror, but I thought the mirror was appropriate in expressing the subjectivity of presence through the act of reflection.”

Ko has been working on the project for three to four years, and his process has evolved over time as he’s learned to reflect the environment in his mirror. He discovered, through trial and error, how to nearly get the desired results he wanted. But it came at a cost.

“The mirror is fairly dangerous and may break easily – so it must be treated carefully,” Ko said. “Certain mirrors have broken on occasion and damaged my hands. However, working steadily over the years… I’ve learned ways to work safely with mirrors.”

He took up photography as a child, playing with his mother’s cameras as a kid, and loved looking through photo albums to relive beautiful memories. However, his inspiration for “The Square” came from a more painful time in his life.

“When I was about 7 years old, I was flying a kite alongside a railroad track. I was with a neighborhood boy about 4 years old who was watching me fly the kite. In a split second, a train ran over the boy. Since then, I … became shy and timid, not wanting to interfere with other people and began to have concerns about other people’s gazes.”

The mirror, he said, allows him to “fit in” to his surroundings and protect himself by reflecting what’s around him. He considers his project an opportunity to accept his place in society.

Ko hopes to add to his series by using a larger mirror and visiting new locations. He wants to expand the idea of the “sensitivity of seeing” – how people perceive their surroundings and their place in them.

“For the people looking at my work, they may be able to reflect on how we are living in the physical world and the constantly changing complex ideological framework we have imposed,” Seokmin said. “And, I hope, maybe, the viewers become more generous and loving to themselves.”

Select works from “The Square” will be included in the anniversary exhibition, “Art Projects International: Twenty Years,” scheduled to open in New York in November.