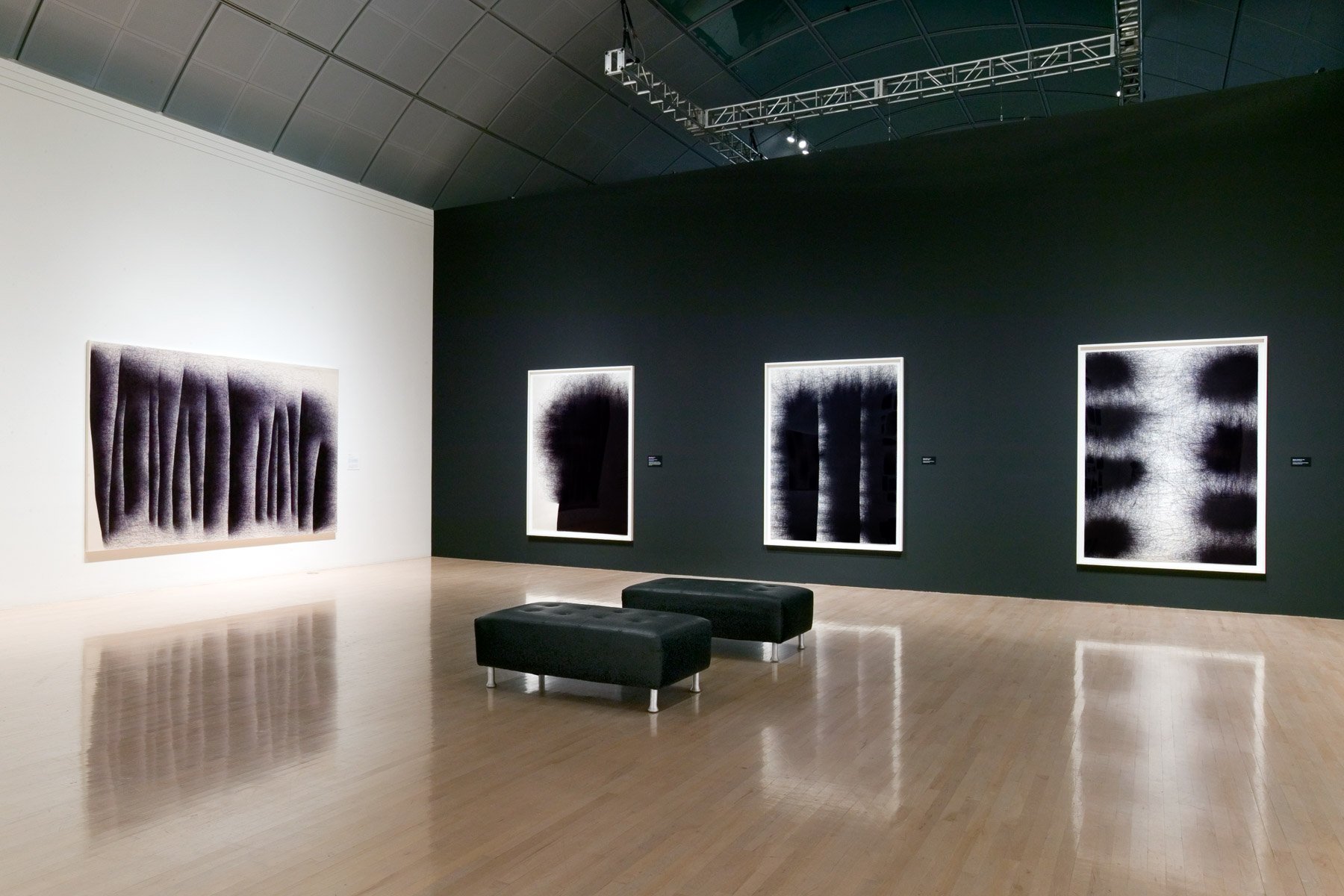 IL LEE (b. 1952, Seoul, Korea. Lives and works in New York) is celebrated for his pioneering work with ballpoint pen that began 40 years ago and continues today. Lee’s work, with its unorthodox media and distinctive style, and artistic contributions have received worldwide recognition. In his recent acrylic and oil works on canvas, Lee offers a counterpoint to his well-known ballpoint pen work and continues his early investigations of materials and process that began decades ago. Lee’s oeuvre offers a great breadth of approaches and media as he investigates drawing, the negative and its positive, line and form and of what is rendered and what is there but not rendered. Lee’s monolithic focus has created a universe at once cohesive and yet still expanding in all directions.

Born and raised in Seoul, Lee studied painting in the 1960s and 1970s with seminal figures of South Korean contemporary art including those in the vanguard of the abstract monochrome and minimalist painting movement (Dansaekhwa). In 1977, armed with a distinct cultural background and artistic training, Lee moved to New York where he developed his signature process and style using ballpoint pen, a medium important to his practice over the decades. Reductive in palette and nonreferential, Lee’s understated work reveals its many influences and opens up discussions of the new.

Work by the artist is represented in prominent collections including The Metropolitan Museum of Art, Minneapolis Institute of Art, San Jose Museum of Art, Palm Springs Art Museum, Vilcek Foundation, National Museum of Modern and Contemporary Art Korea, Leeum Samsung Museum of Art (Seoul), and Société Bic (France), among others.

Reviews and feature articles about the artist have appeared in major international publications including the New York Times, New Yorker, Artnews, Art in America, Art Asia Pacific, San Francisco Chronicle and Newsweek. Lee is featured in The Metropolitan Museum of Art’s The Artist Project, an online video series exploring the museum’s collection, as well as in the book The Artist Project: What Artists See When They Look at Art, published by Phaidon, London (2017).

“A selection of drawings—striking indigo and black ink abstractions, all done exclusively in ballpoint pen, on paper and canvas—makes up this engrossing show by the veteran Korean artist Il Lee. The centerpiece is a 50-foot drawing that took two and a half months and 400 to 500 ballpoint pens to complete, with the artist working on sections at a time that were propped up against the wall in his Brooklyn studio. It is a sweeping, rhythmical abstraction in blue recalling the Italian Futurist paintings of Giacomo Balla, combined with elements of traditional Asian ink and wash painting.”  –The New York Times

“What makes this work, and others like it, so alluring is its unexpected suggestiveness. When Mr. Lee’s drawings conjure before you a soft, densely inked snowflakelike blob with feathery edges, or a pattern that recalls a distant constellation, or foliage, or even stones in a pool of clear, shallow water, it is hard not to be mesmerized. The simple, minimal forms are instinctively seductive.”  –The New York Times

“Hundreds of thousands of disposable ballpoint pens have passed through the Korean-born, Brooklyn-based artist’s hands over the years, and he’s mastered his medium. He knows how the ink will warm to produce a free-flowing line; he’s learned how to build up shadow and leave room for light. His works, which integrate Sol LeWitt-style minimalism and sumukhwa, an Asian ink-painting tradition, range from small studies to a new, fifty-foot-long work on paper that looks like an abstract meditation on a mountain range.”  –The New Yorker

“One major implication of this almost infinitely stretchable line is that Lee’s art is composed by long durations rather than in short, discontinuous passages. This durational aspect of Lee’s process is dramatically different from how most paintings are created, even those that seem to fuse into unified lines, shapes or fields. The making of his work is like a kind of dance, and what we view are the accumulated traces of orchestrated and intuitive movements; this is not graphic art but choreographic art.”  –Raphael Rubinstein, IL LEE and The Line of Duration

An 80-page, fully-illustrated catalogue was published on the occasion of a major survey