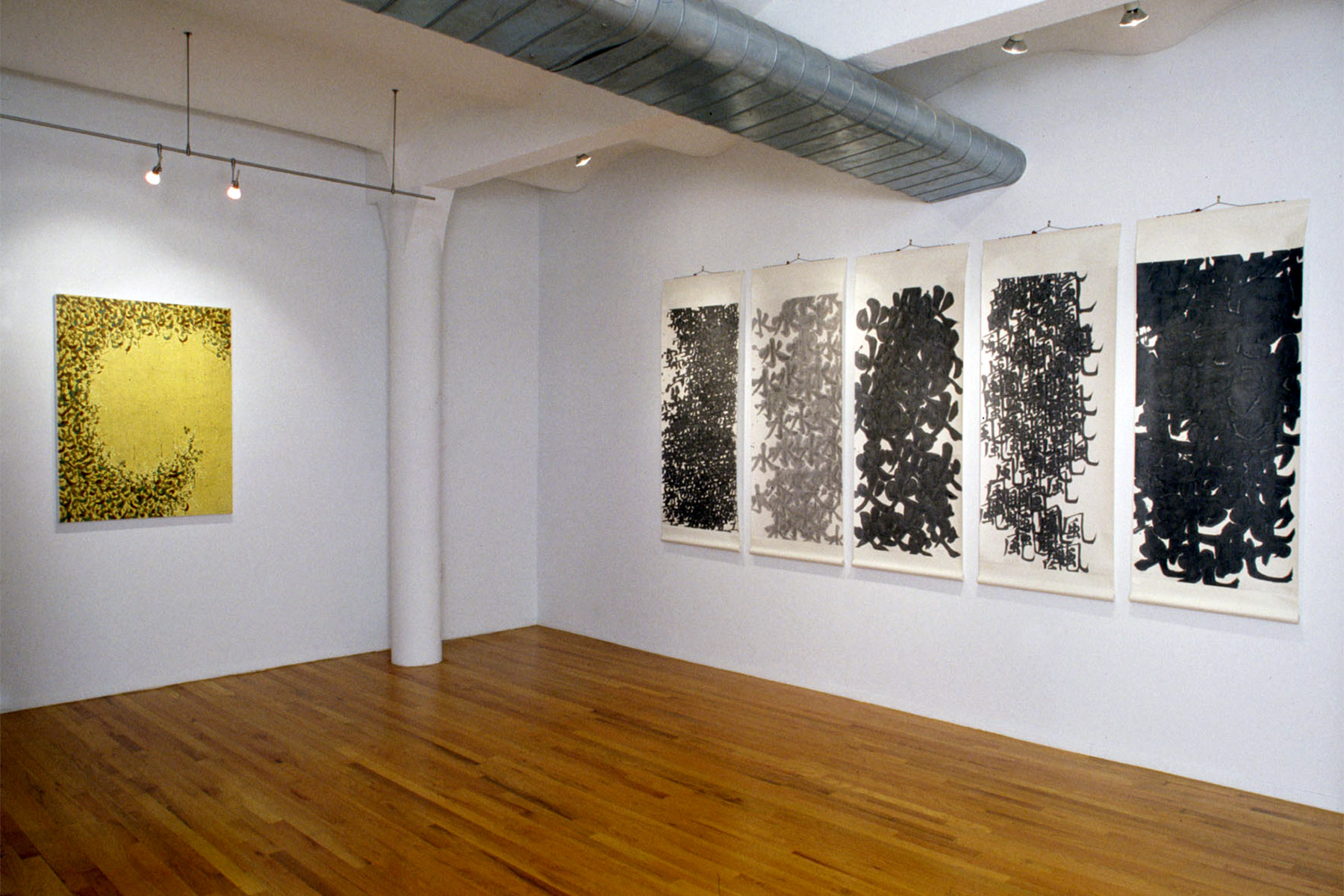 Each of the artists of Routes of Influence: International Artists from Asia has ties to a different part of Asia. Some of these artists now work solely outside of Asia, in New York or Paris for example, while others split their time between continents. They are bound by their shared participation in the activities of global contemporary art. Additionally, to lesser or greater degrees, each artist’s work incorporates information from their respective cultures and those cultures’ histories as a way of engaging a variety of discussions that broach subjects from aesthetics to the nature of cultural hegemony. The variety of influences and means present in these six artists’ works points to the diversity of their Asian backgrounds and to how, as a result, each artist’s voice resonates as an individual contribution to the ever changing and expanding international cultural dialogue.

For two decades Il Lee has been drawing abstract forms on paper with ballpoint pens. Recently he has returned to working on canvas and moved toward incorporating a wide range of hues into the works. The hues drawn with colored pencil form backgrounds while the primary forms are still created with thousands of pen lines. As in his works on paper, Lee captures much of the nuance and boldness found in traditional ink and brush drawing with his deft rendering.

Jian-Jun Zhang’s projects range from large indoor and outdoor installations to conceptual sculptures which incorporate antique Chinese pottery into modernist forms. Zhang sites a broad range of influences ranging from Asian philosophies of antiquity to early 20th century European art. He is also accomplished in traditional methods such as drawing with ink on paper. This skill, and Zhang’s referencing of thousands of years of art history from the contemporary moment to the distant past, is visible in the large, boldly painted five panel work Nothingness, Water, Fire, Wind, Earth. Zhang’s installation piece, Sumi-Ink Garden of Re-Creation, will be shown at the Shanghai Biennale in November, 2002.

Pouran Jinchi is a contemporary artist who borrows from her home culture’s traditions of literature and calligraphy to pursue her own aesthetic investigations. Texts are morphed beyond recognition into flowing, anthropomorphic shapes. On pale but vibrantly hued grounds individual brush strokes appear or meld into delineations and structures that derive from a particular mating of the world of letters and the aesthetics of form. The texts do not offer meaning primarily through being read, yet the viewer cannot escape being influenced by the cultural weight of their origins.

IN-HYUNG KIM
Born in Seoul, Korea, has lived and worked in Paris since 1979.

Layerings of hue and confident renderings form In-Hyung Kim’s deceivingly straightforward paintings of plants and flowers. A dark shadow hides deep pearlescent blues and the intricate drawing of a plant going to seed is just a few well placed lines. Early works are almost overtly surreal; recent paintings present a fantastic edge through nuances in style. Thus the subtle
odd beauty of a painting of a small bunch of flowers only unfolds in all its aspects for the patient, attentive viewer.

Yeong Gill Kim populates large canvases with quickly brushed drawings of people and trees. But despite his deliberate use of specific scale and media and his reliance on multiple perspectives, which announce Kim’s relationship with traditional styles, his work is resolutely contemporary. Kim paints many works in each series and changes appear gradually. Some years ago blue was introduced into his black and white palette before disappearing again. In paintings of this year groupings of trees and other objects have begun to appear that have an highly evolved stylization, briefly bringing to mind popular animation. Kim’s works are currently also on view in an exhibition ConversASIAN in Cayman at the National Gallery of the Cayman Islands.

One exhibition of Hilda Shen’s rolled metal screen and paper sculptures was titled “Three Dimensional Drawings.” Recently she has been working on a series of drawings that dispense with the third dimension. Pencil is dipped in water to make abstract drawings on gesso covered paper. The technique allows for dark rough lines as well as translucent washes creating a fluid
space with depth but without formal perspective. Recently, Shen has been working on bright pigment and glue works, unrestrained starbursts of color that project from the wall and become drawings in space.