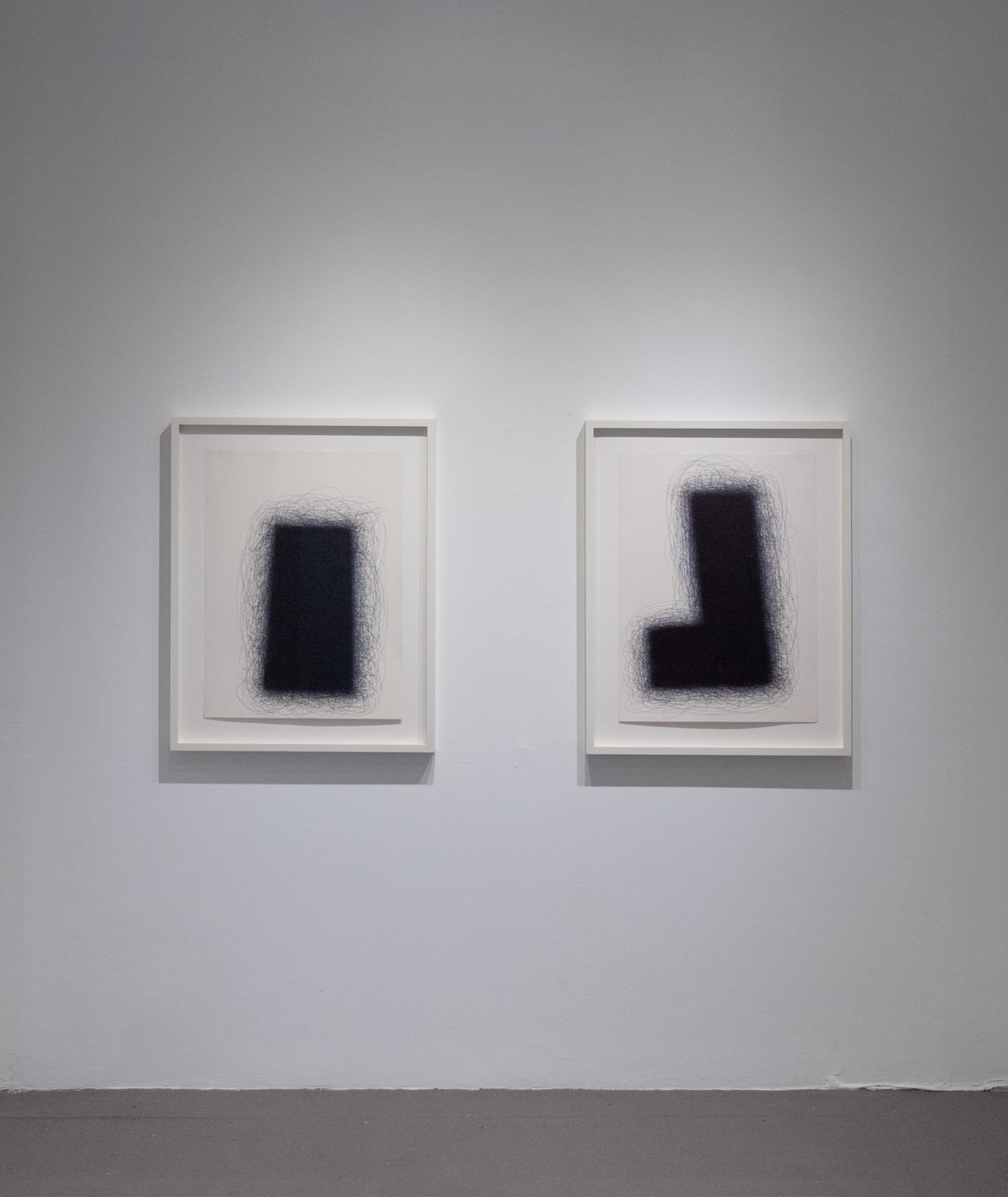 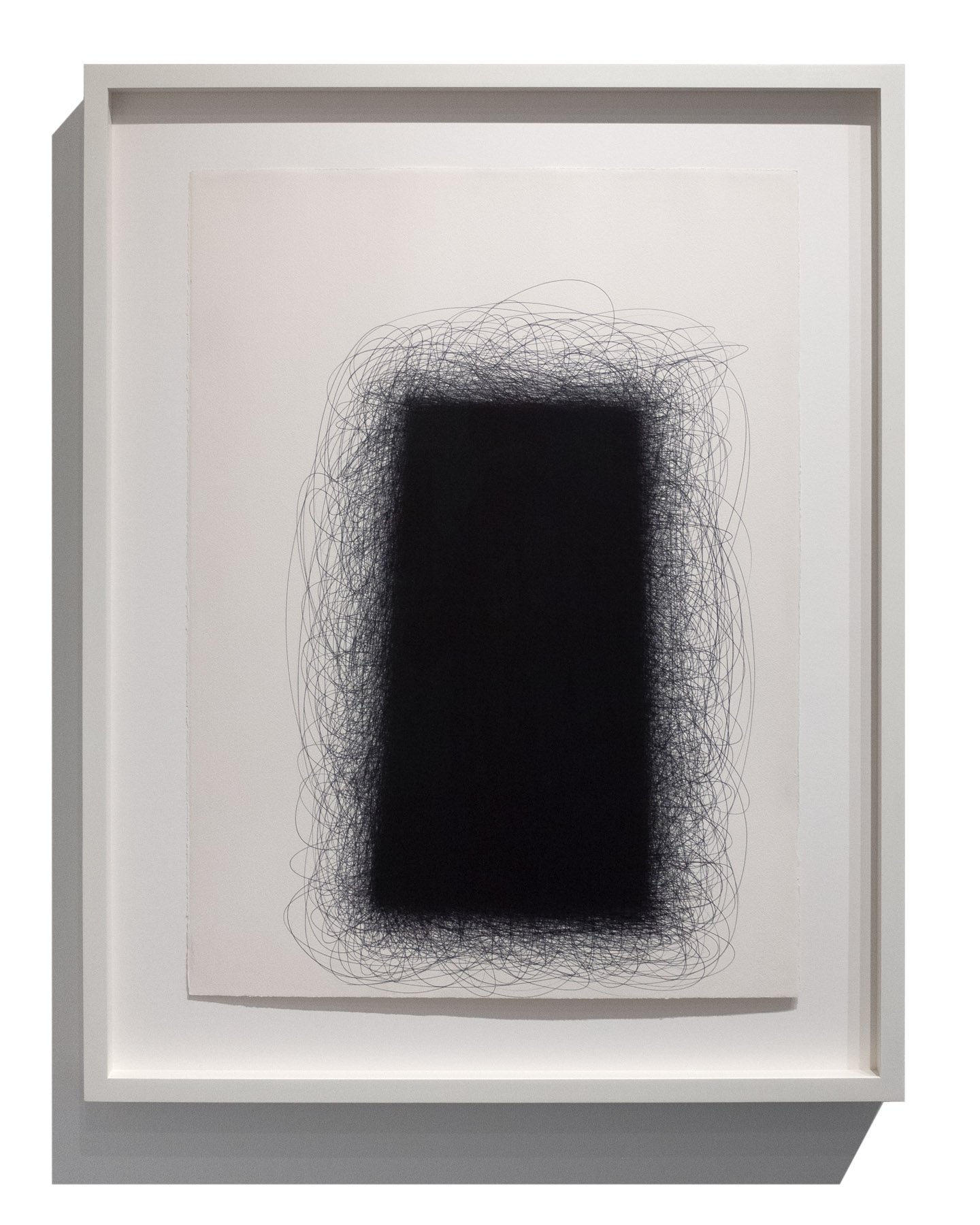 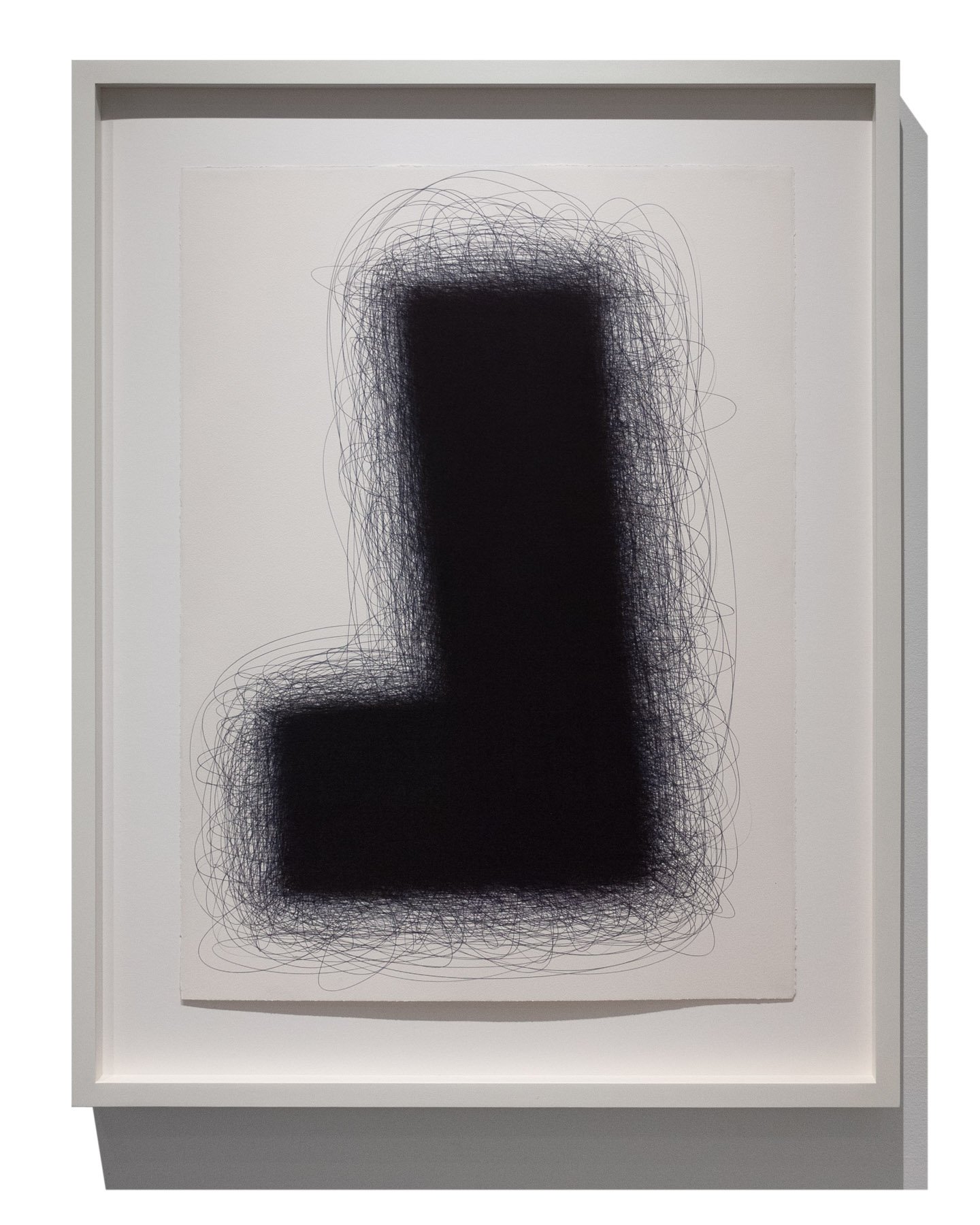 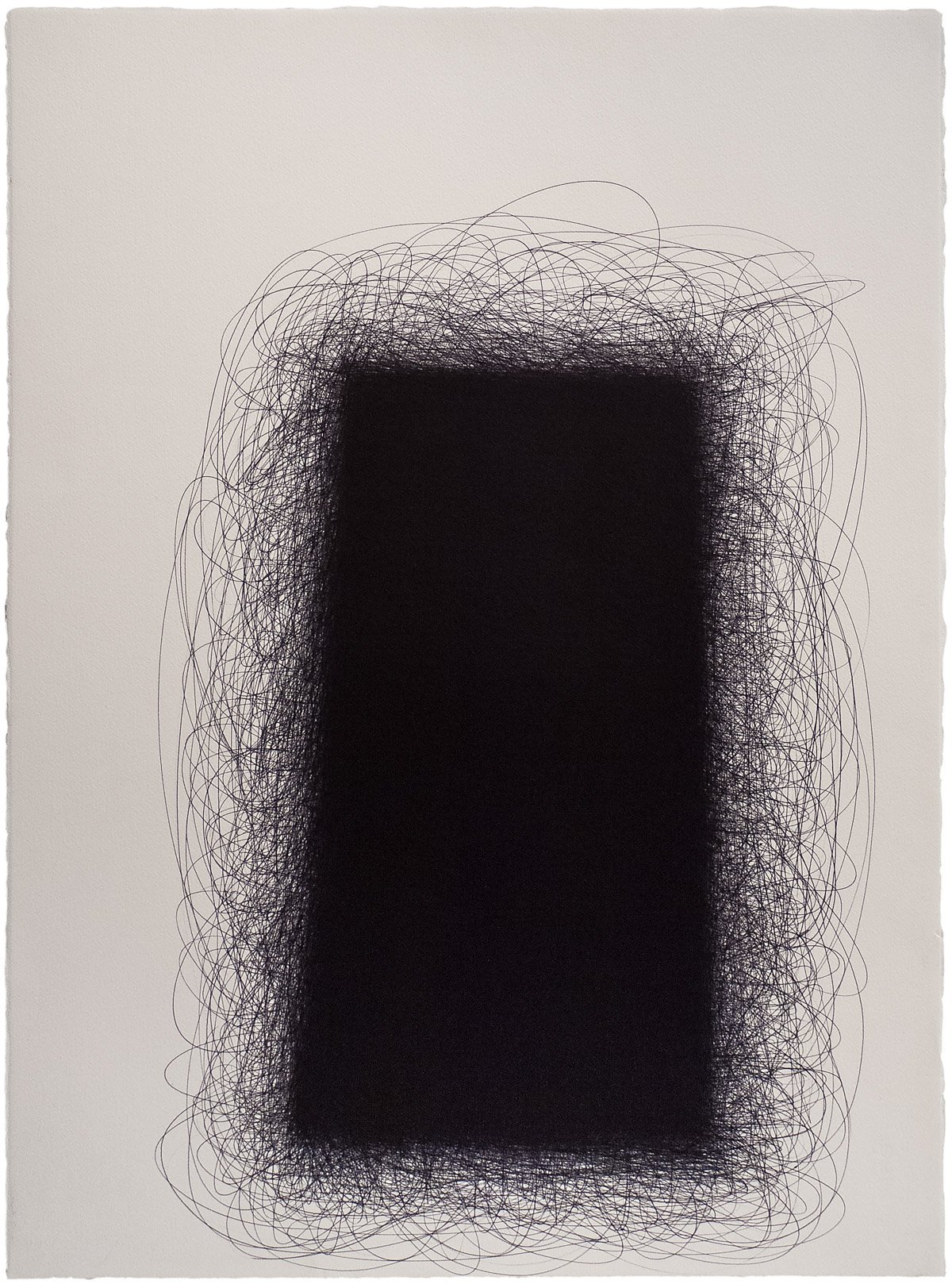 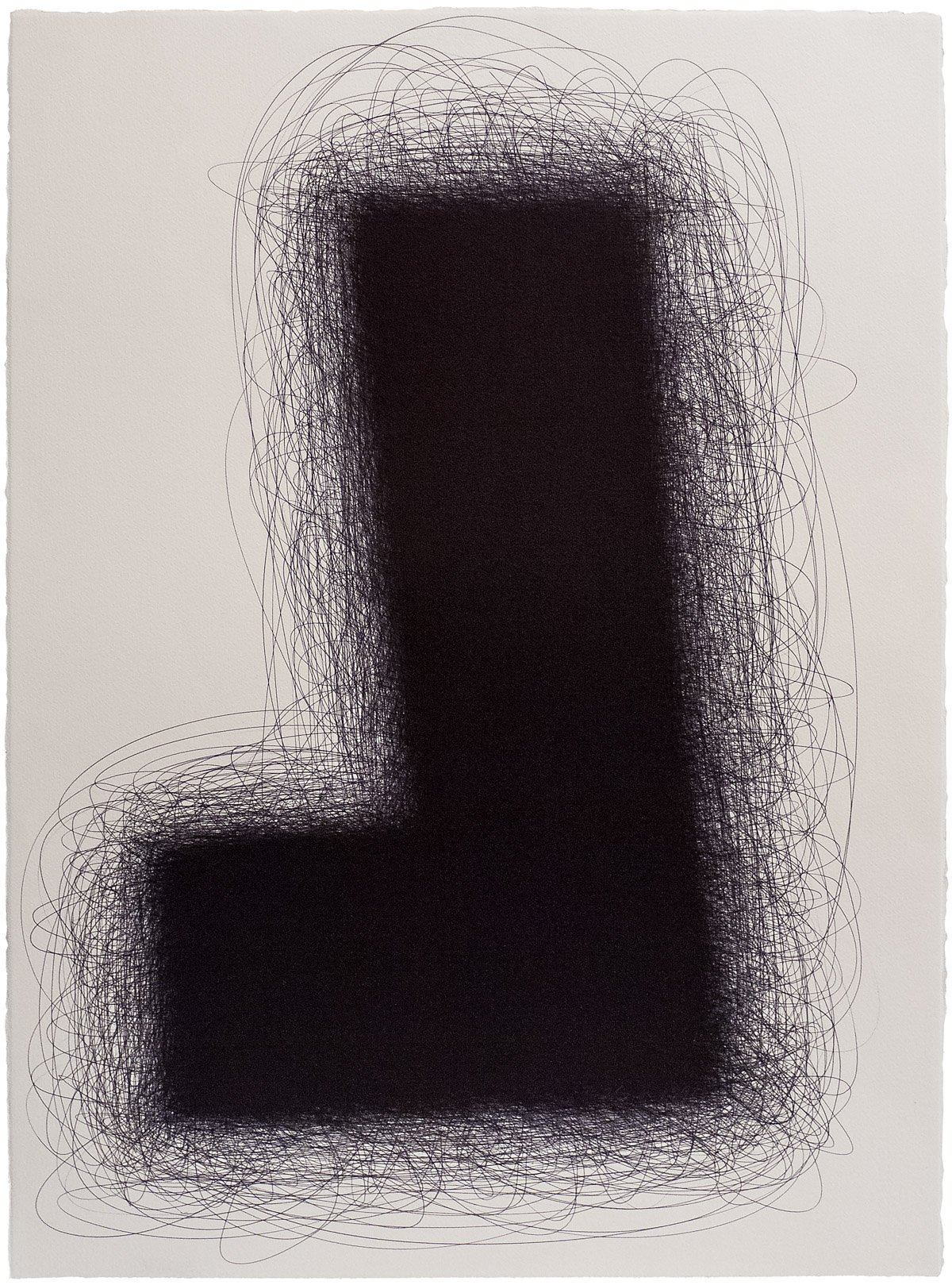 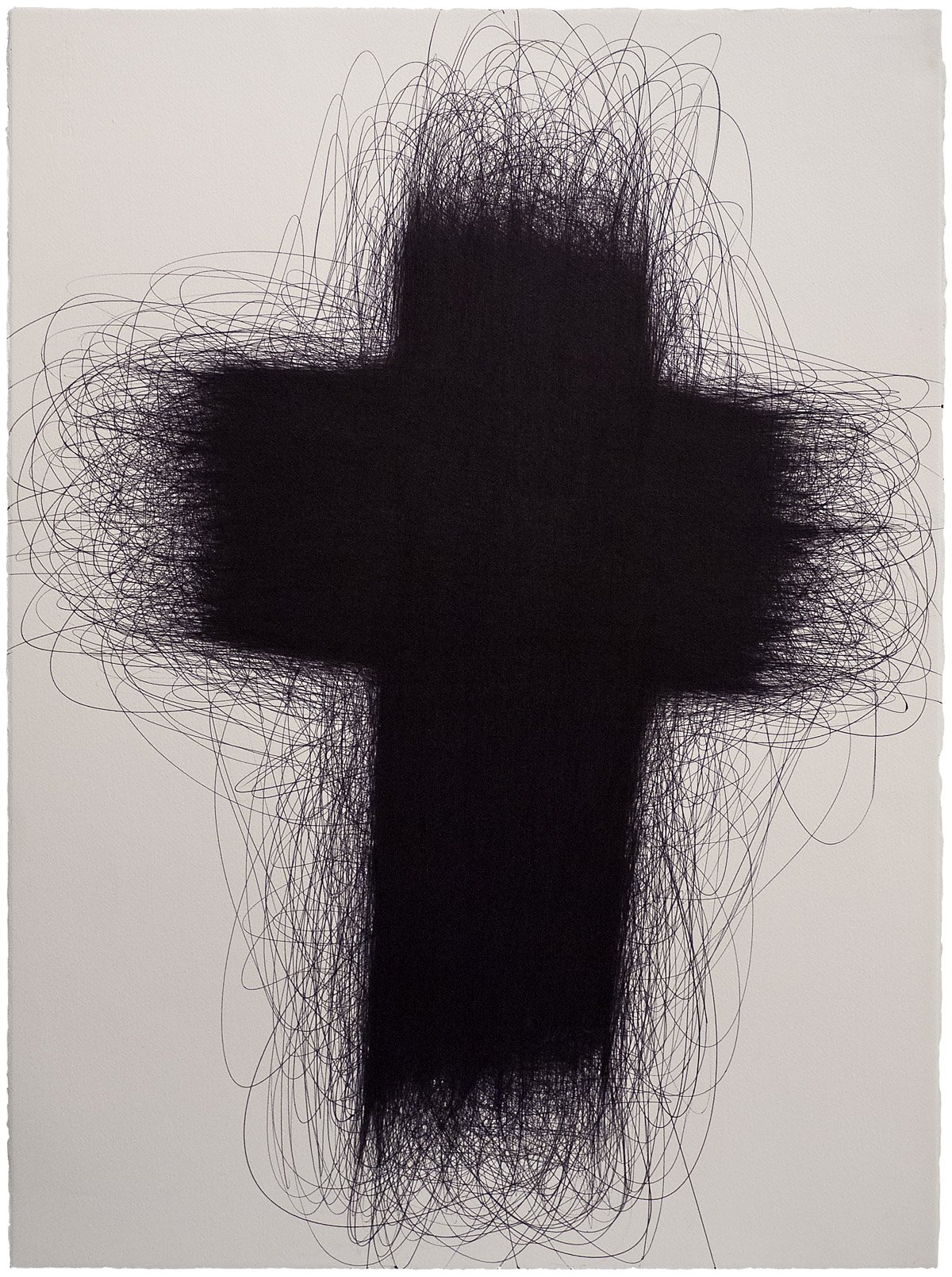 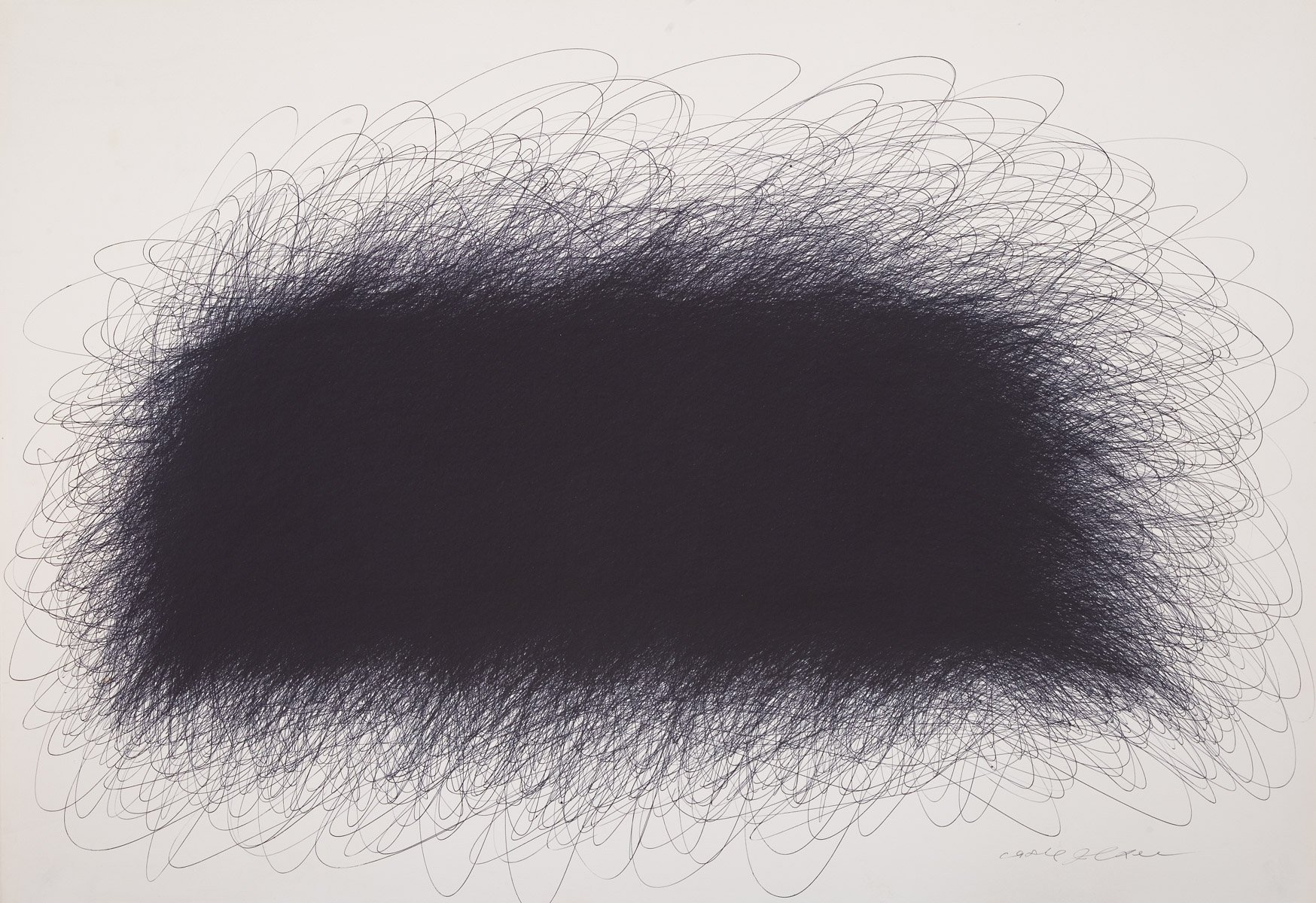 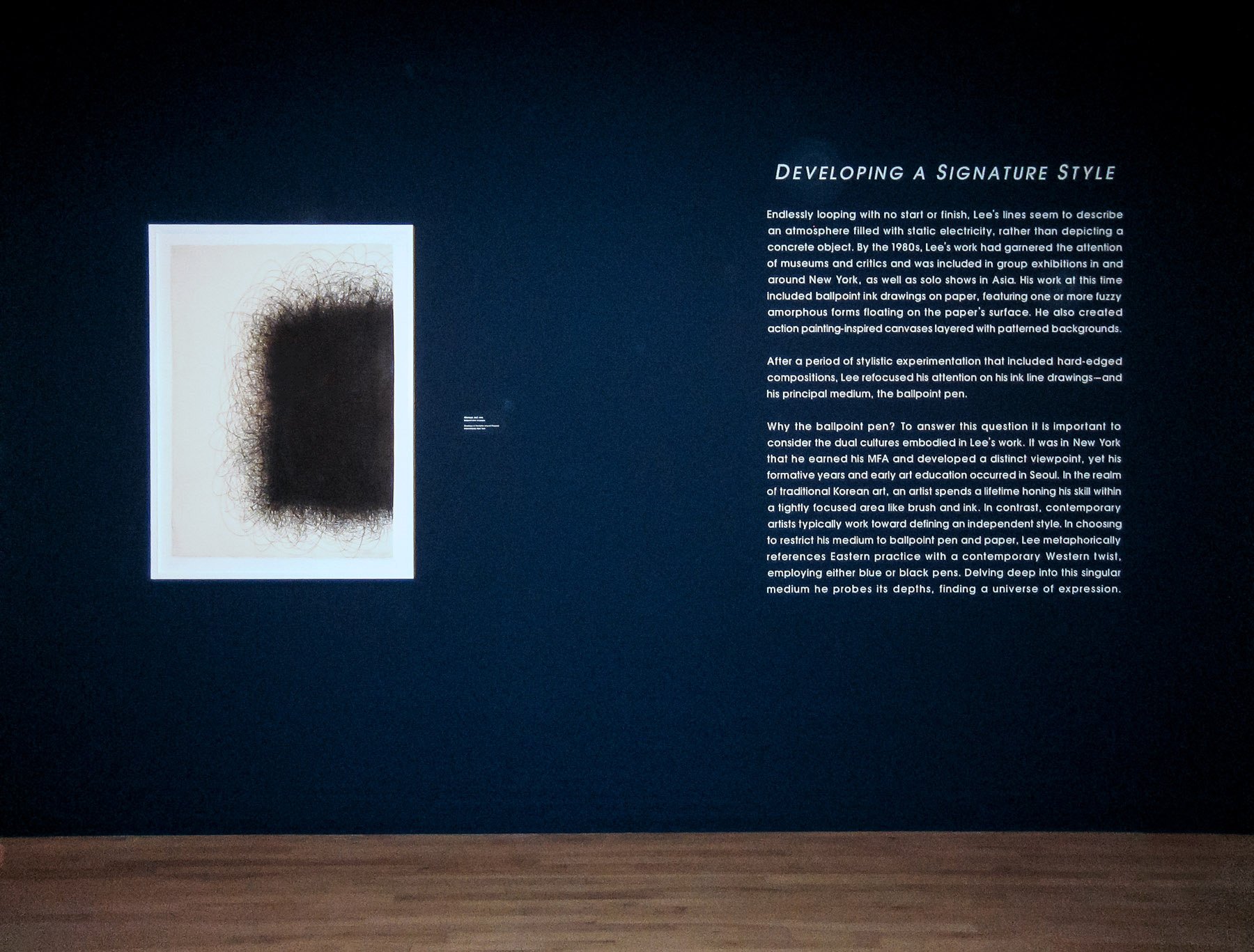 IL LEE: Ballpoint Abstractions at the San Jose Museum of Art, 2007.
In a critical period of experimentation, development, and production during his early years in New York City, Il Lee created a small group of ballpoint pen works on paper focused on presenting a single form floating on a white field. Although rarely seen, examples of these works from the mid-1990s were included in two important exhibitions: Lee’s mid-career survey at San Jose Museum of Art in 2007 (photo above) and his “40 Years in New York” exhibition at Art Projects International in 2016. Two of these works are on view for the first time in From ’96: 3996/4196.

Il Lee’s ballpoint pen work is invariably powerful, but there is something particularly mighty about these modestly sized drawings Untitled 3996 and Untitled 4196 (30 x 22 1/2 inches each).Unusual in Lee’s ouvre of often round or splayed forms, both Untitled 3996 and Untitled 4196 present a single form with angled corners. The 6-sided shape of 3996 and the 4-sided shape of 4196 are clearly geometric and also clearly handmade; one is a tilted “L” flipped on the horizontal axis and the other an off center trapezoid.

The interiors of the forms are solid color made by the almost vicious overlapping of thousands of ballpoint pen lines. The black is such a deep, uncompromising hue that the forms look as if they are on another plane than the surface of the paper. The looser pen lines at the forms’ edges appear as traces of activity at the edge of pits of trapezoidal and inverted “L” shape. These lines are at once intimately part of and seeming separate from their parent forms—perhaps like simplistic imaginings of the Hawking radiation surrounding a black hole.

Masterful yet utterly free rendering and stark yet also modulated value contrasts add to the works’ complexities. And the two works hung together have their own dialogue—a quiet but forceful conversation. The distant hum of tremendous, cyclic forces fills the room.

IL LEE (b. 1952 Seoul, Korea. Lives and works in New York) is celebrated for his pioneering work with ballpoint pen that began 40 years ago and continues today. Lee’s work, with its unorthodox media and distinctive style, and artistic contributions have received worldwide recognition. In his recent acrylic and oil works on canvas, Lee offers a counterpoint to his well-known ballpoint pen work and continues his early investigations of materials and process that began decades ago. Born and raised in Seoul, Lee studied painting in the 1960s and 1970s with seminal figures of South Korean contemporary art including those in the vanguard of the abstract monochrome and minimalist painting movement (Dansaekhwa). In 1977, armed with a distinct cultural background and artistic training, Lee moved to New York where he developed his signature process and style using ballpoint pen, a medium important to his practice over the decades. Lee’s innovative and historically grounded ballpoint pen works were the subject of a critically-acclaimed mid-career retrospective at the San Jose Museum of Art in 2007. Work by the artist is represented in prominent collections, including The Metropolitan Museum of Art, Minneapolis Institute of Art, San Jose Museum of Art, Palm Springs Art Museum, Vilcek Foundation, National Museum of Modern and Contemporary Art Korea, Leeum Samsung Museum of Art (Seoul), and Société Bic (France), among others.

For additional images and to arrange your visit, please contact
api@artprojects.com or 212-343-2599. 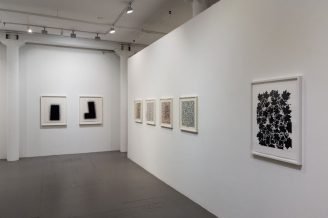