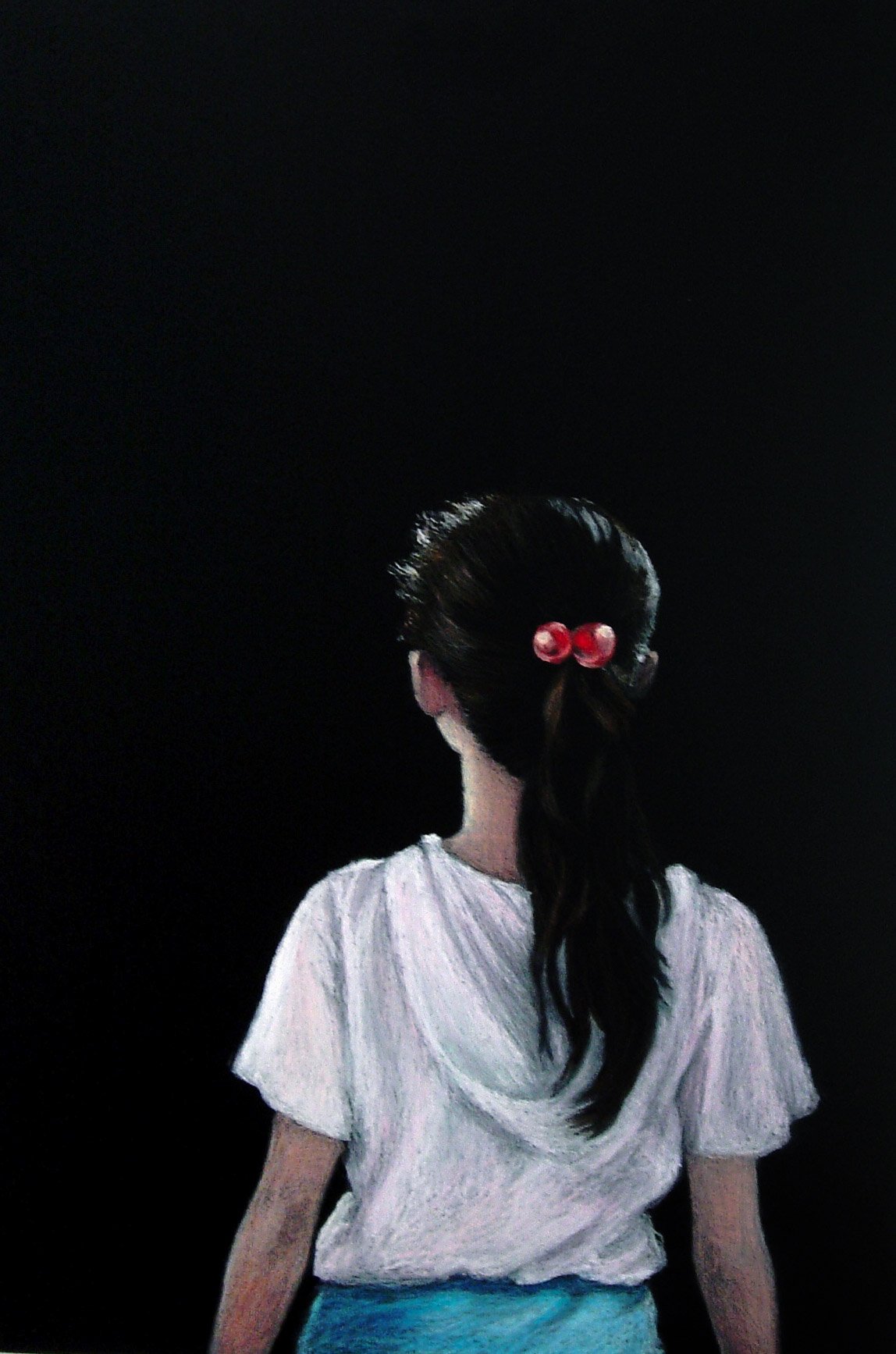 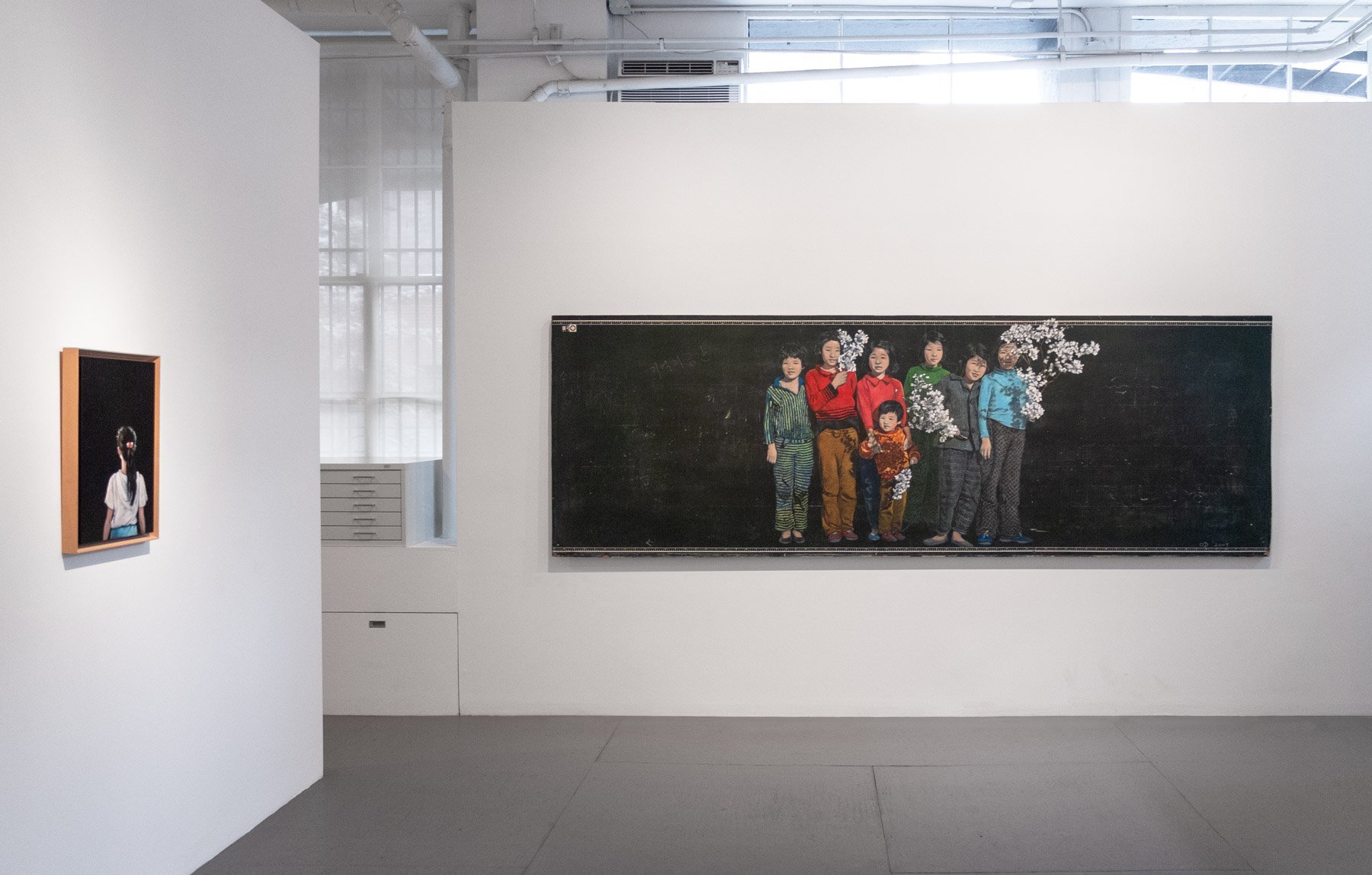 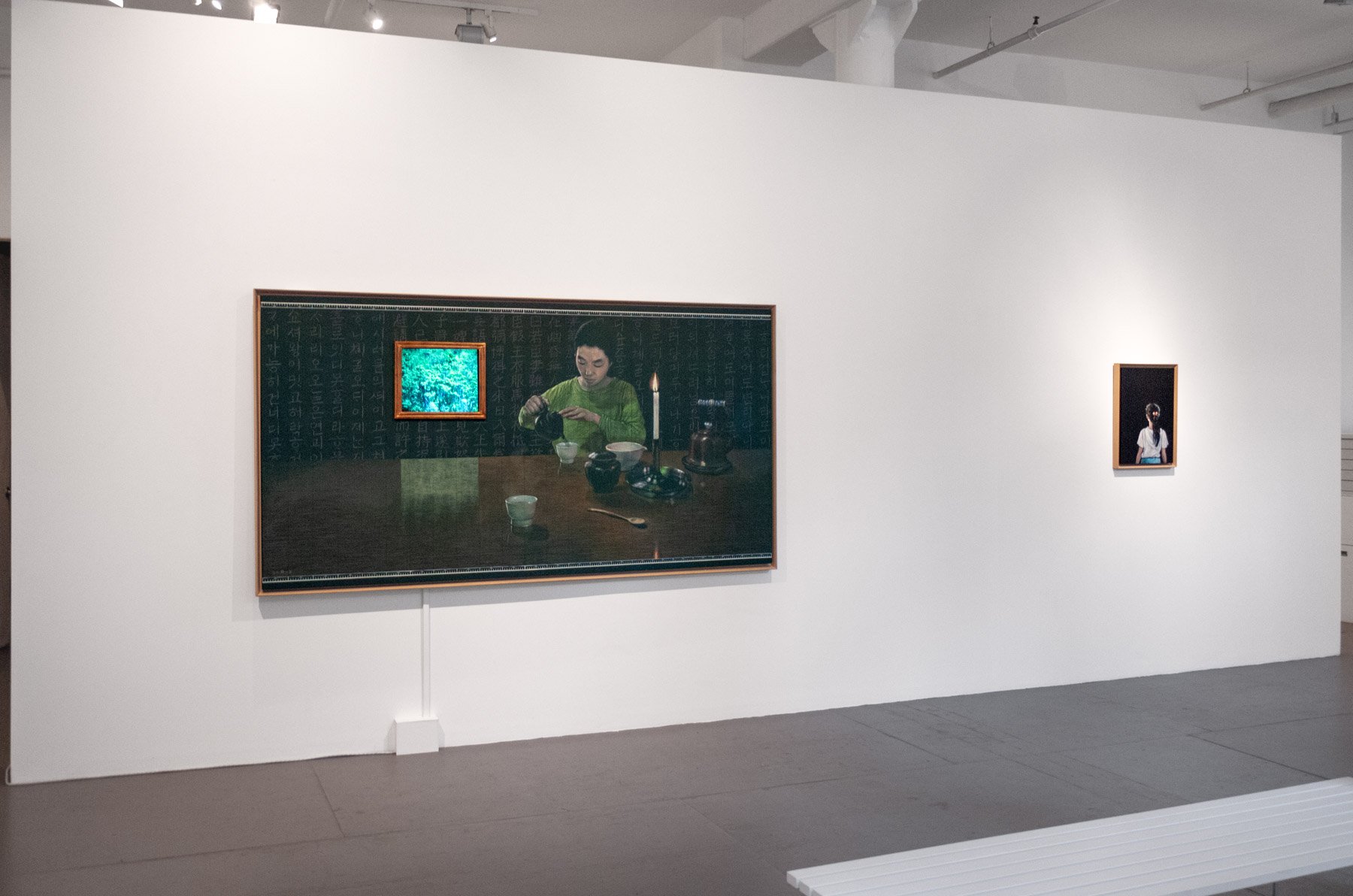 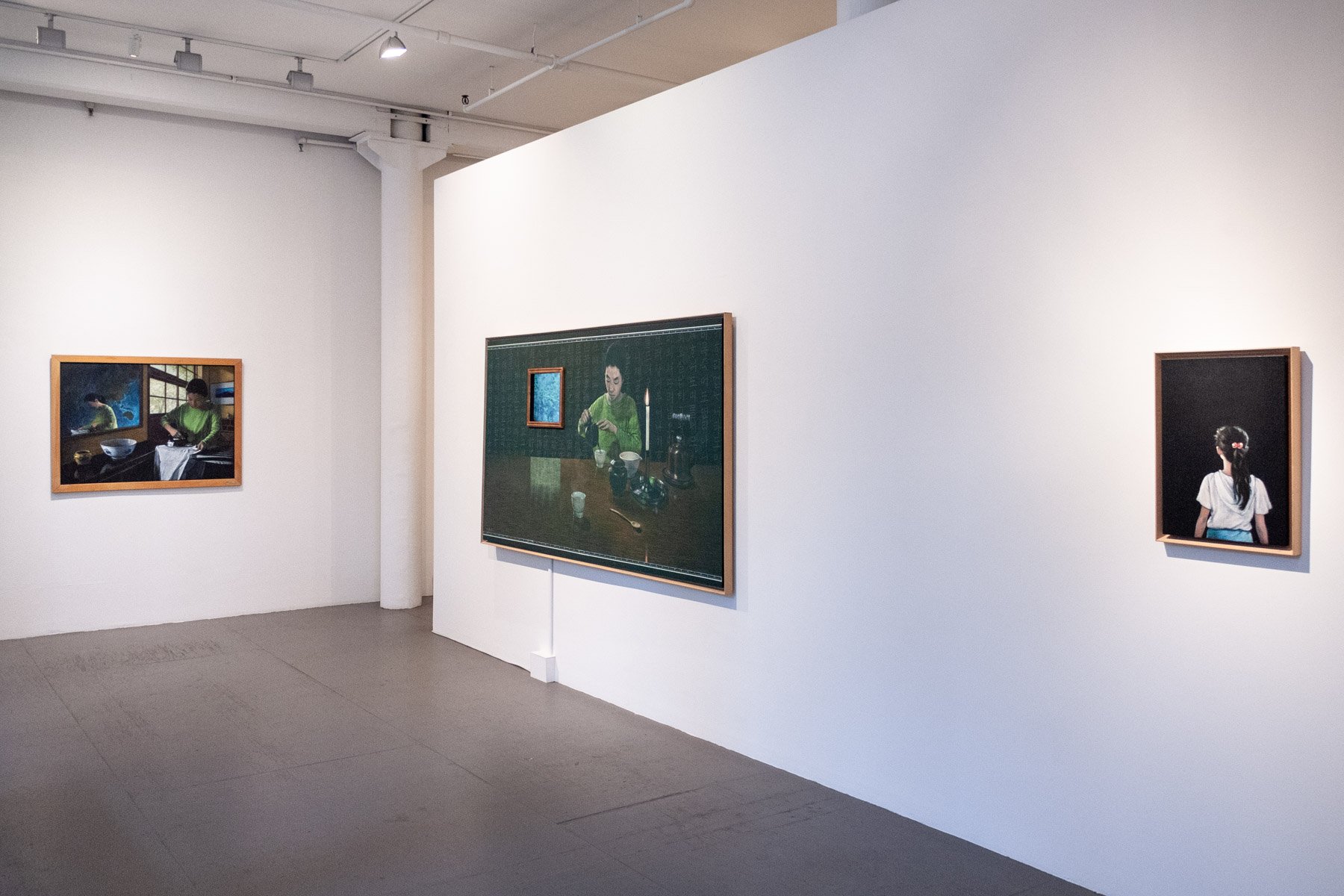 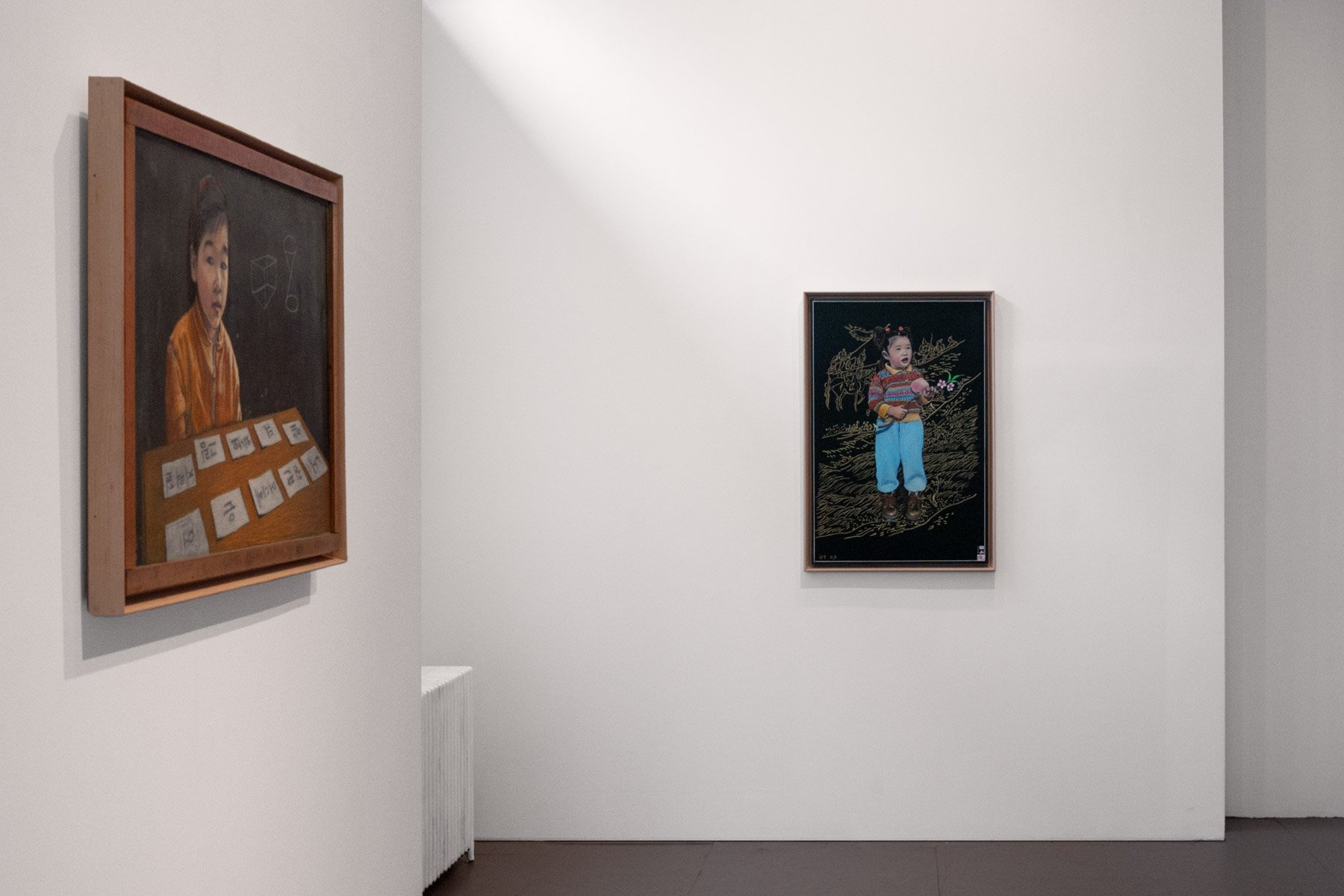 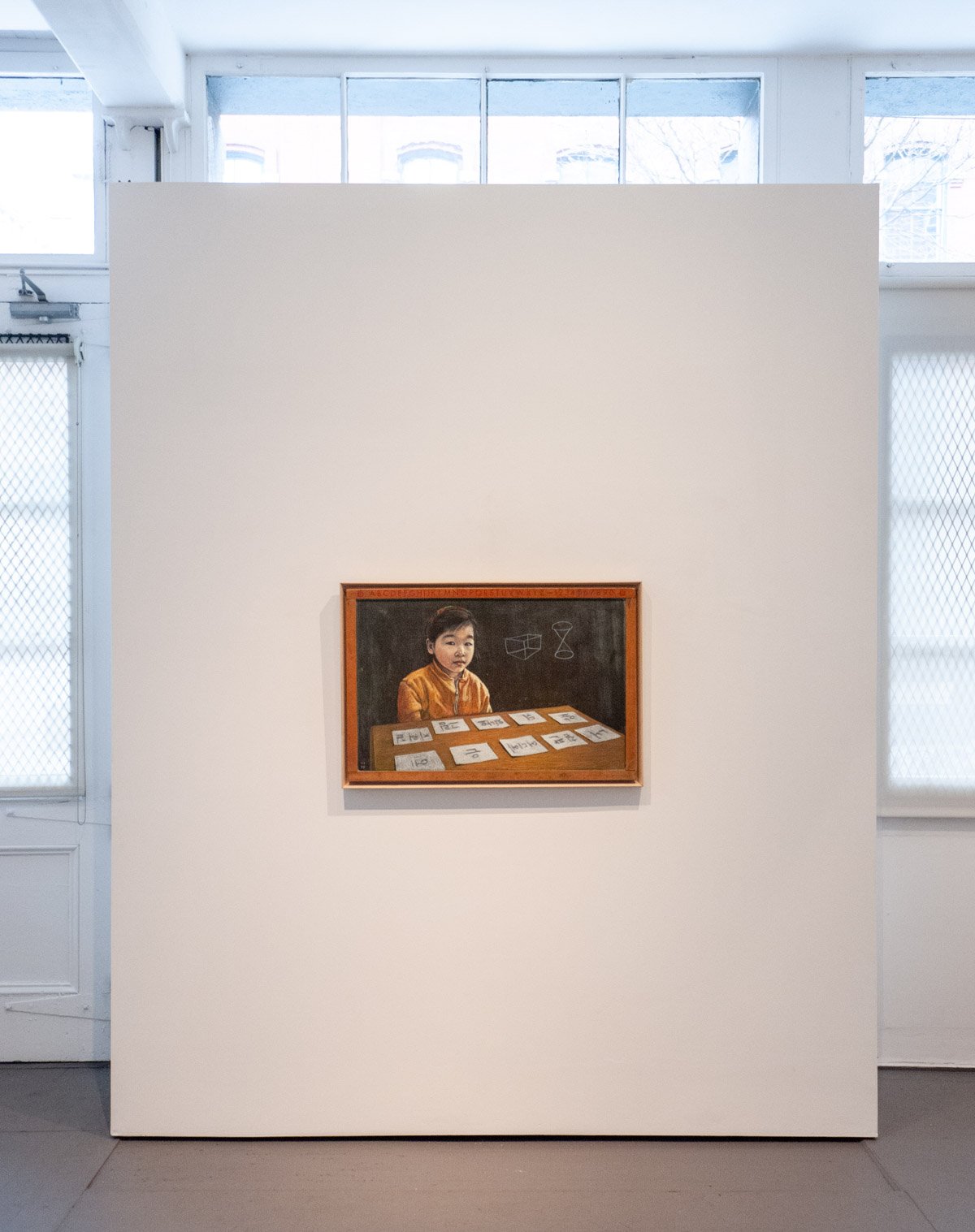 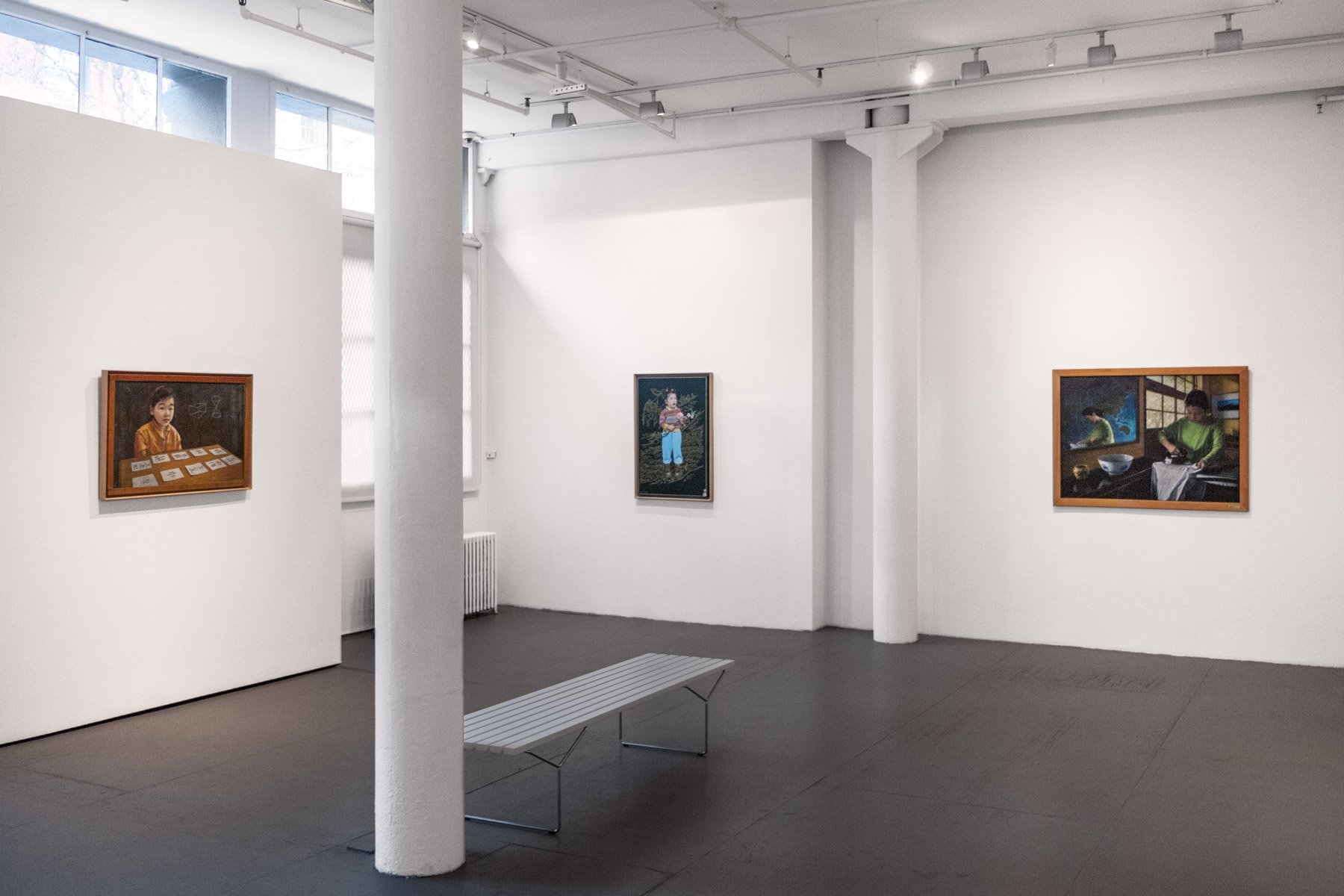 Art Projects International is pleased to present Portraits, a solo exhibition of Myong Hi Kim’s unconventional paintings in her signature medium of oil pastel on chalkboard. This exhibition, the first dedicated to Kim’s paintings depicting female subjects, brings together key portraits that draw upon her peripatetic childhood and experience dividing her time between a remote village in South Korea and New York City. Captured from life, memory, literature and imagination, through life and photographs, her art explores contemporary social issues such as territorial division, rural exodus, migration, and displacement.

Since 1990, one of Kim’s studios has been in an abandoned schoolhouse in the remotest part of South Korea near the DMZ. She also has a studio in New York City and observes, “… the difference is between city life and rural life, not between the United States and Korea ….” At a time of emphasis on the metropolis in South Korea, her deliberate move to a remote locale was unique. Though rural escapism is not her subject, this move became an artistic turning point for Kim. In the school she chose as her studio home, the original chalkboards retained markings from their original use and, after first serving to block the bitter cold, they became the grounds for Kim’s signature works and the basis for her future artistic development.

Kim’s oil pastel on chalkboard works are neither occupied nor unoccupied. Children may pose in the woods or play in schoolyards, but nothing in Kim’s work is as it seems; she explains, “…the vision that I present is that of apparition rather than appearance….” As the black of her chalkboard surface reads as shadow and darkness, her oil sticks bring to view apparitions that glow with realism and artifice at once. Through her work, through careful rendering of elusive yet fully present light effects, Kim shares her understanding that events are never discrete and are of multiple spaces and times. The situation of the individual within the rugged terrain of their life comes home softly as her light touch in rendering form contrasts with the circumstance of lives as varied as the immigrant child and the displaced citizen.

Kim’s paintings on chalkboards are symbolist portraits, and often fuse the Korean people’s nomadic history and her own experiences with keen insight on issues of displacement and migration both voluntary and forced. Reflecting on Dongja with Peach (2007), the artist notes: “Dongja” means “child attendant”. It appears in Buddhist and folk art paintings traditionally. Also, in Shamanistic tradition, the child is a messenger between dead and the living. The peach she is holding means healing and love. There is a time lapse where the fruit and the flower are coexisting. The background is a gold illustration of filial piety story, mother protecting the child from invading soldiers.”

A simple scene of a woman ironing takes on layers of meaning in Ironing (2006). The viewer finds that a mirror doubles as a map of the world; a strategically placed framed painting of a mountain appears within the painting; antique vases contrast with domestic, electric appliances. Another portrait, Drinking Tea (2004), is one of the largest works in the exhibition measuring 47 ¼ x 90 ½ inches. Similar in composition to her earlier signature work Preparing Kimchi (2000), light streams in through the window, reflects up from the table onto her face. The sense of layered time heightens with the embedded video screen of gently moving images of the green forest. Observing the trajectory of Kim’s life with the figures in her paintings, art critic Eleanor Heartney notes: “But despite Kim’s awareness of the toll exacted by time and history, her ultimate message is one of hope…. Similarly, the figures in her paintings, however much burdened by outside forces, remain resilient and unbowed.” 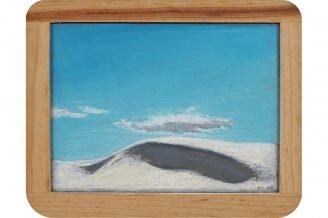 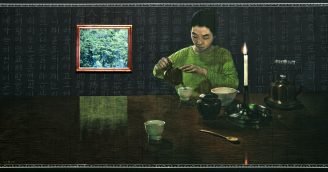