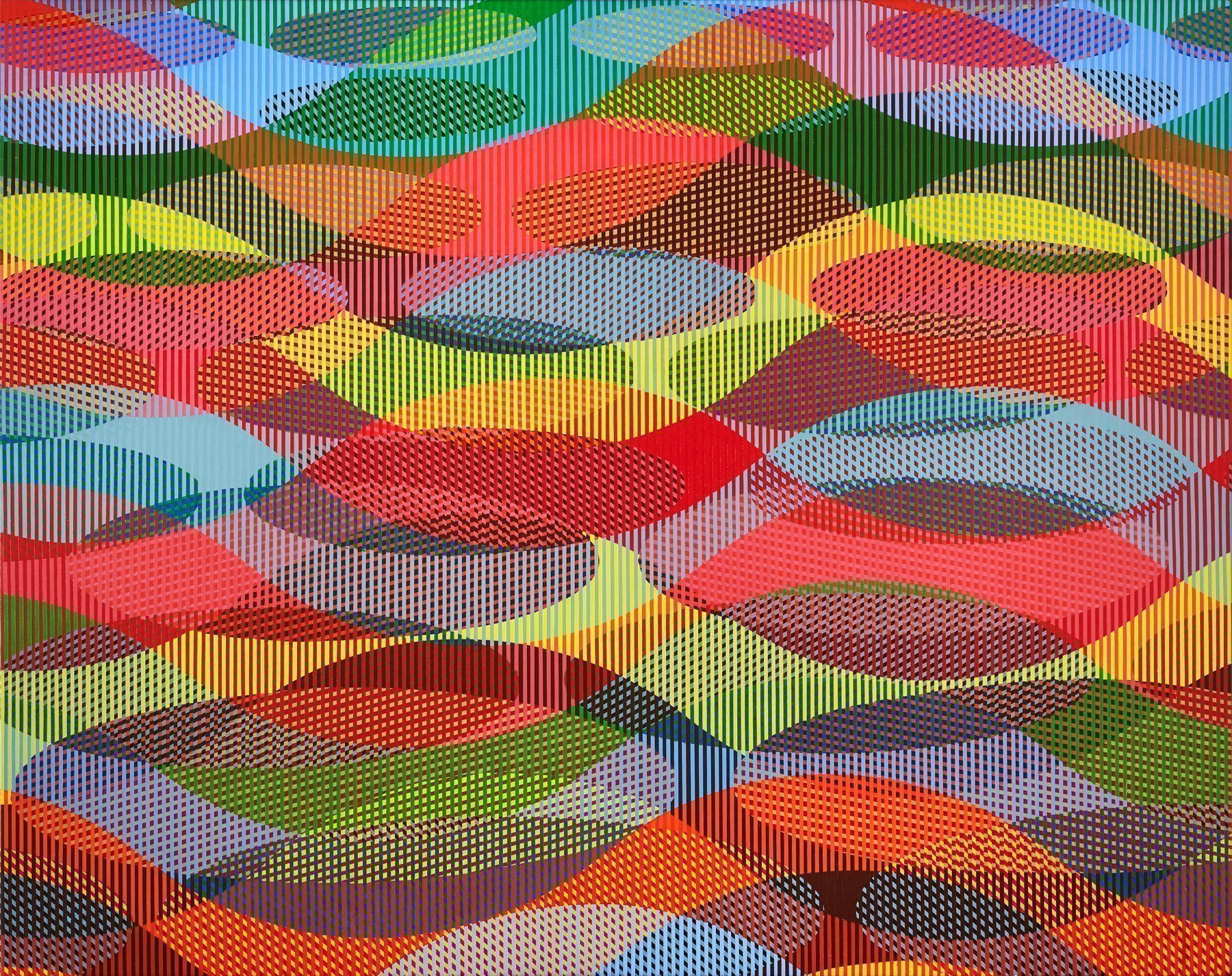 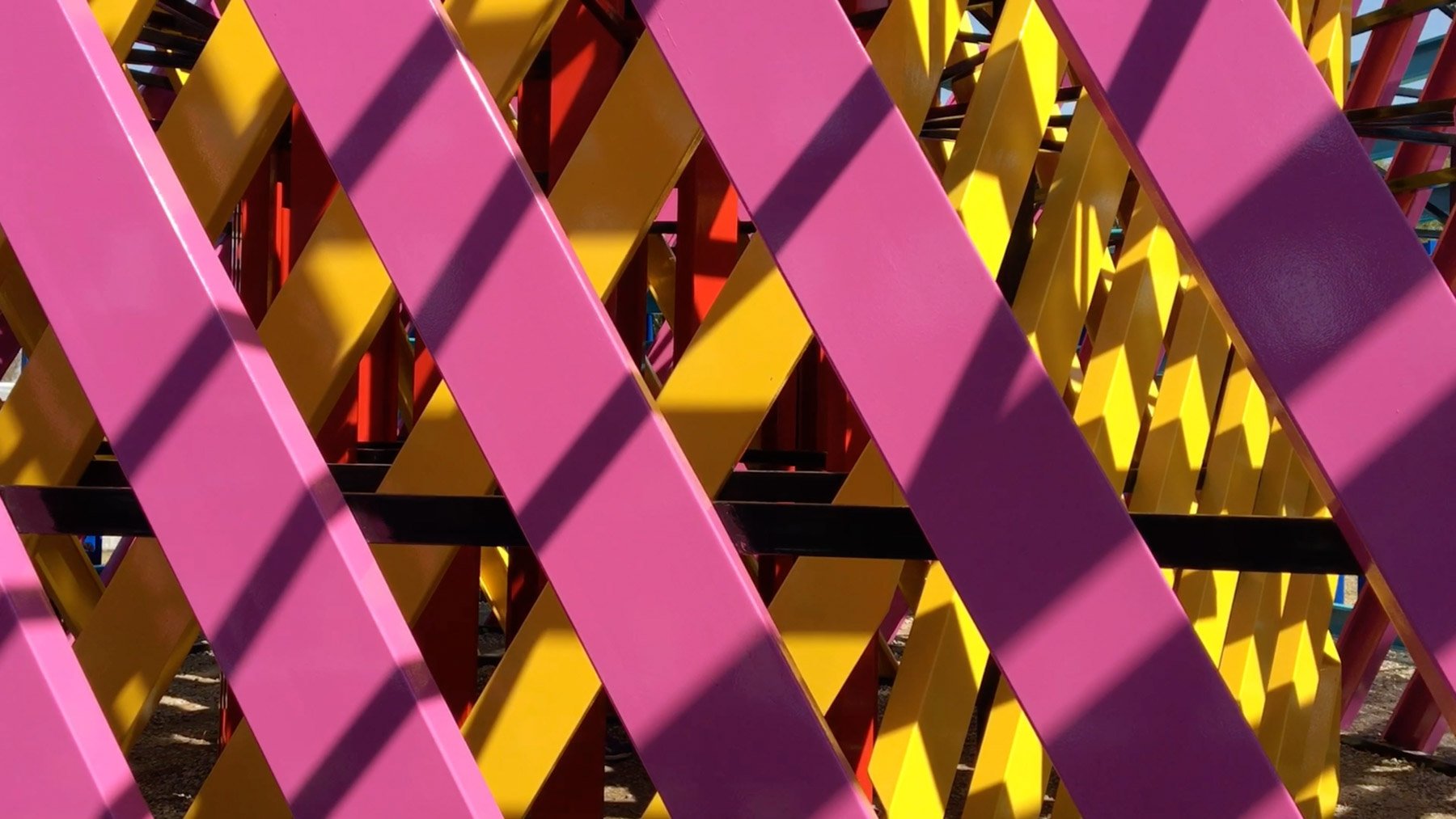 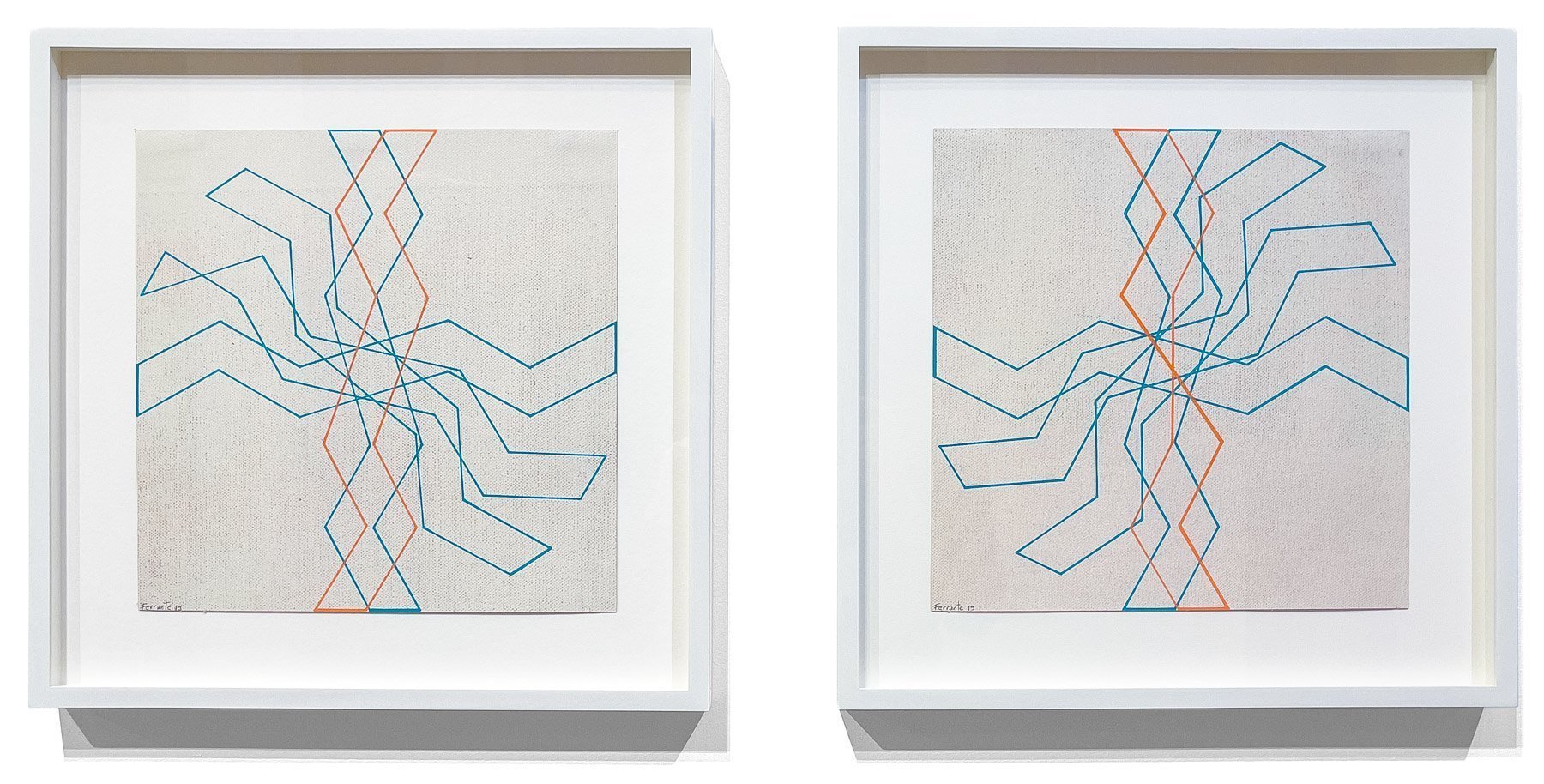 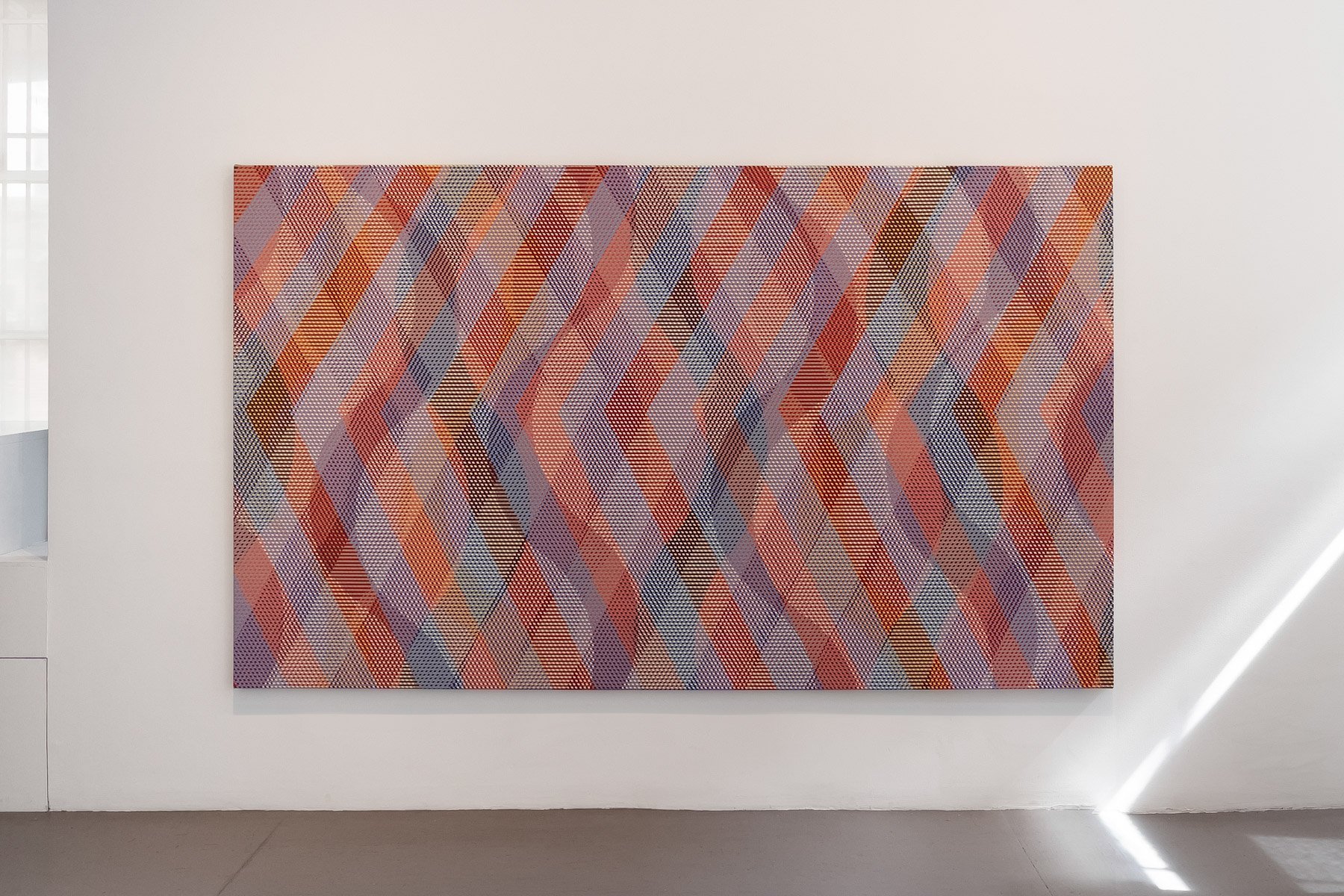 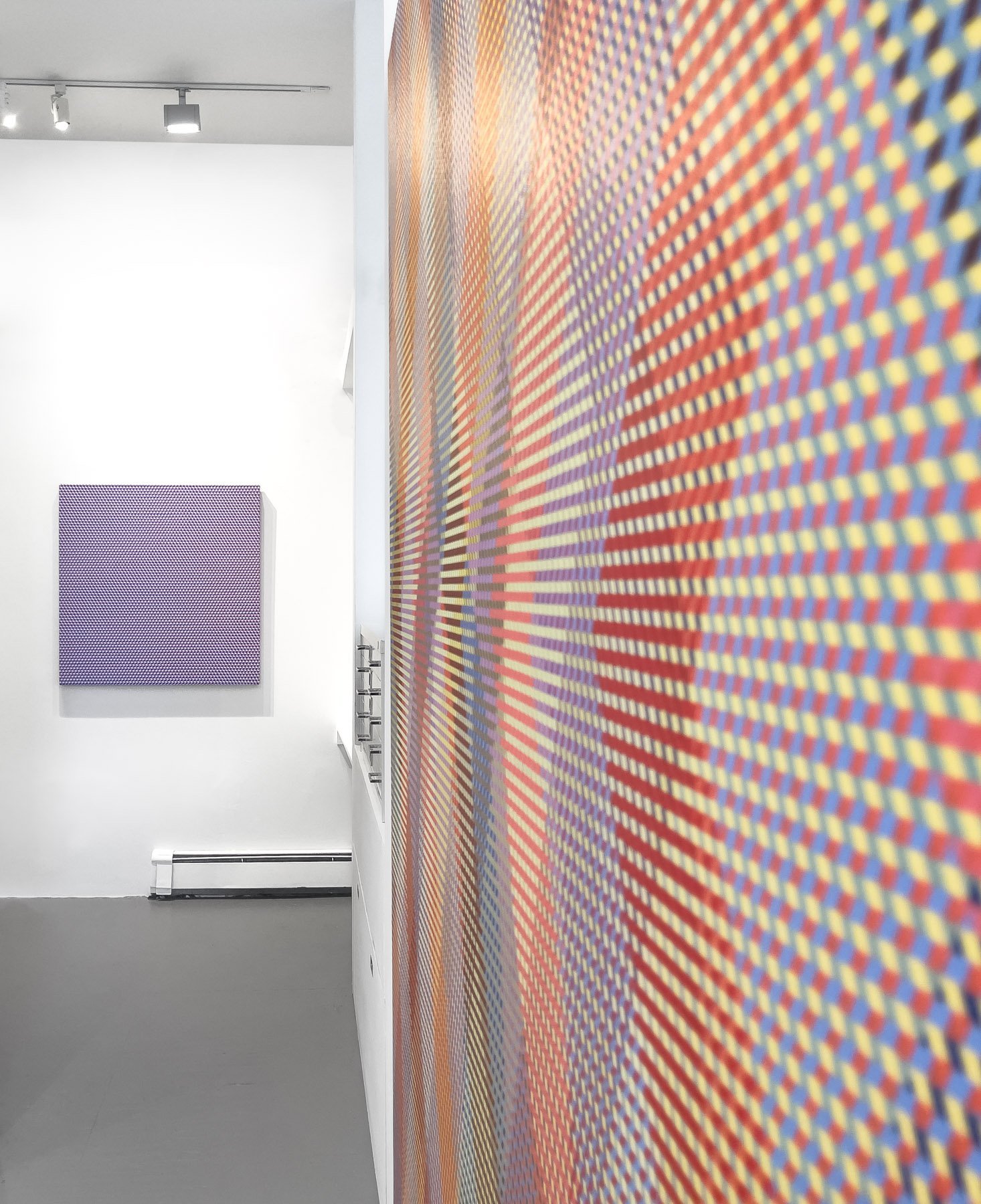 Art Projects International is pleased to present Mariano Ferrante: Partitura — the fourth in the series of BACK WALL initiatives at the gallery.

Focusing on works by Mariano Ferrante created in the mid-2010s, the exhibition highlights Partitura N18/14 (2014) and brings together a selection of more recent paintings from his Monocromo and Pintura series, including the large-scale painting Pintura N51/17 (2017), 70 x 118 inches, and a smaller diptych N20/19 (2019). The exhibition offers a rare window into a critical period in the artist’s career that coincided with the development of his well-known Pintura and Monocromo series of paintings. As Ferrante describes, “Partitura N18/14 is part of the evidence about my investigations of rhythm and movement within Latin American painting. Oscillating waves of color generate a continuous movement, but its reading rhythm is given by vertical straight lines…. All the results of these investigations can be seen in my new work and are still being developed.”

To give insight into the artist’s thinking, the exhibition includes a short film of the immersive Partitura para Exterior N27/16 (2016), a major site-specific work commissioned by the City of Buenos Aires. The artist who is also well known for engaging audiences and communities beyond museums and galleries, and has created numerous public commissions and site-specific installations in Argentina and the United States, comments “A labyrinth built in metal, 30 metres wide and 7 metres high — … [is] about the audience.  … that idea of stepping inside one of my paintings, imagining the children walking around the labyrinth.”

In 2015, works from this period were presented in an important solo exhibition curated by Santiago Bengolea at Zavaleta Lab Arte Contemporáneo in Buenos Aires and in the exhibition catalogue essay Bengolea wrote:

Mariano Ferrante is a contemporary artist committed to painting and drawing. A dedicated and obsessive researcher, a scientist, looking into and constantly re-elaborating the act of painting, questioning even his own ideas until arriving always to new results.

A circle and the repetition of this same element over and over again leads to the creation of a universe of its own, based on its own laws, both physical and spiritual. Using drawing as a language and the pencil as an instrument chosen for its strength, simplicity and sensitivity, the artist presents this mathematical composition of which we start being part immediately as we enter the room.

The following step leads us to the paintings in the following room, which make us come closer. A balance between technique and concept captures us and invites us to go deeper into the works, beyond the surface, as if we were going through windows where painting develops even above the creating hand of the artist.

Ferrante exhibits painting as another possible space, in which he reflects upon the geometrical mathematical poses, movement, space and the concept of time in contemporary painting.

For additional information and images and to arrange your visit, please contact api@artprojects.com or 212-343-2599. 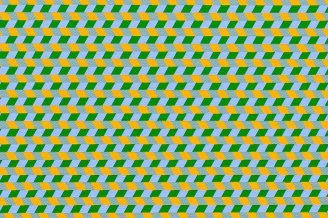