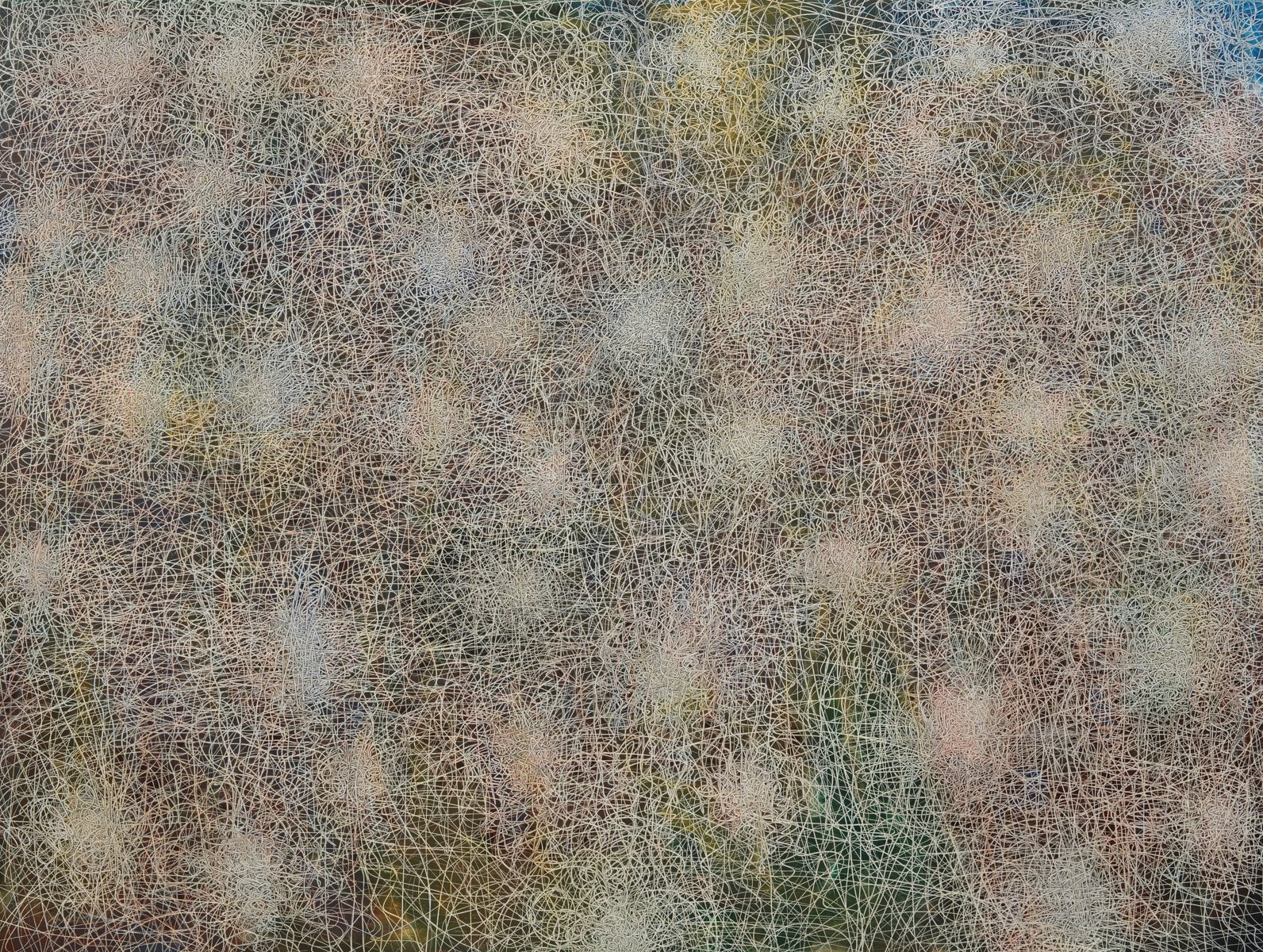 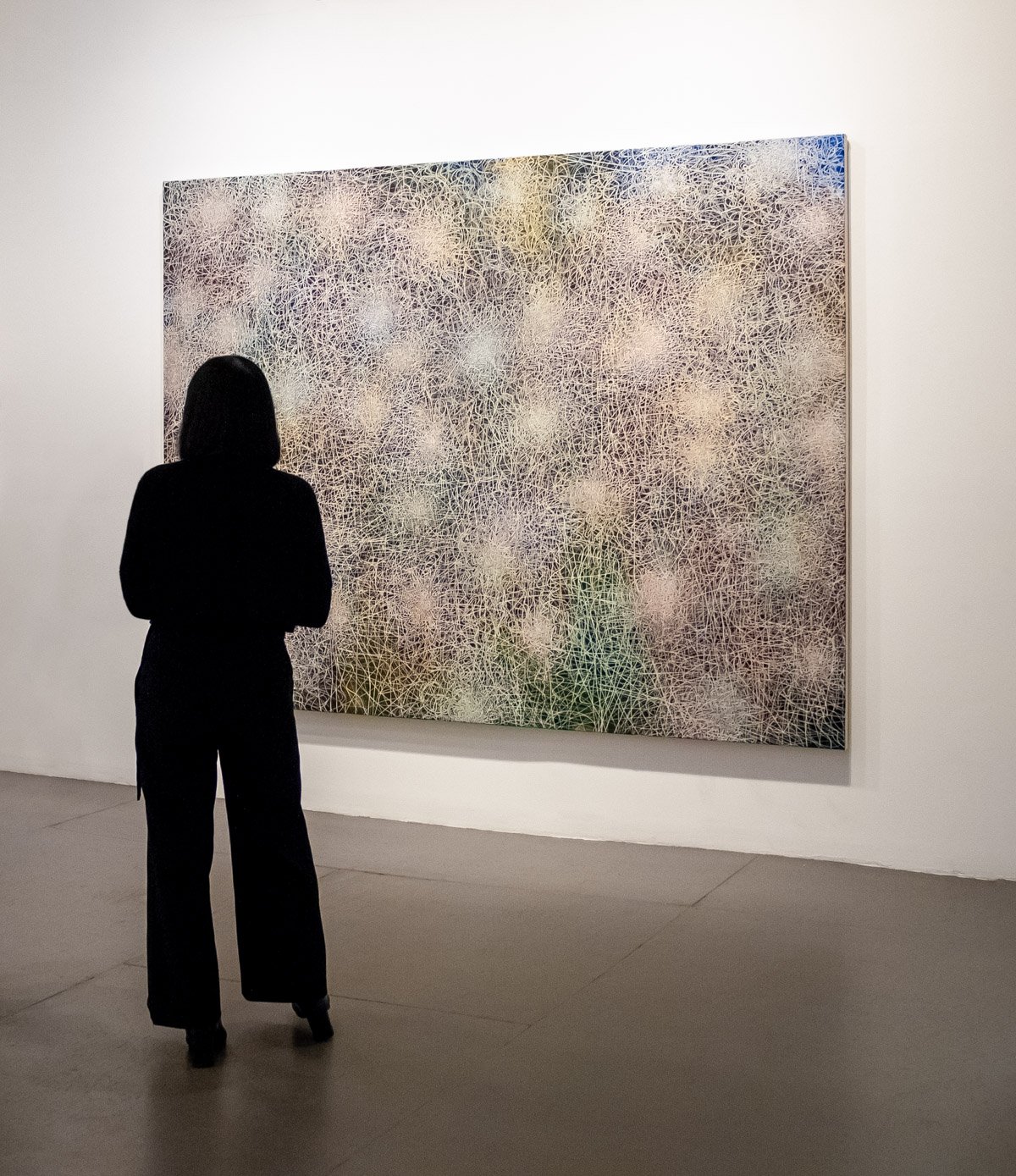 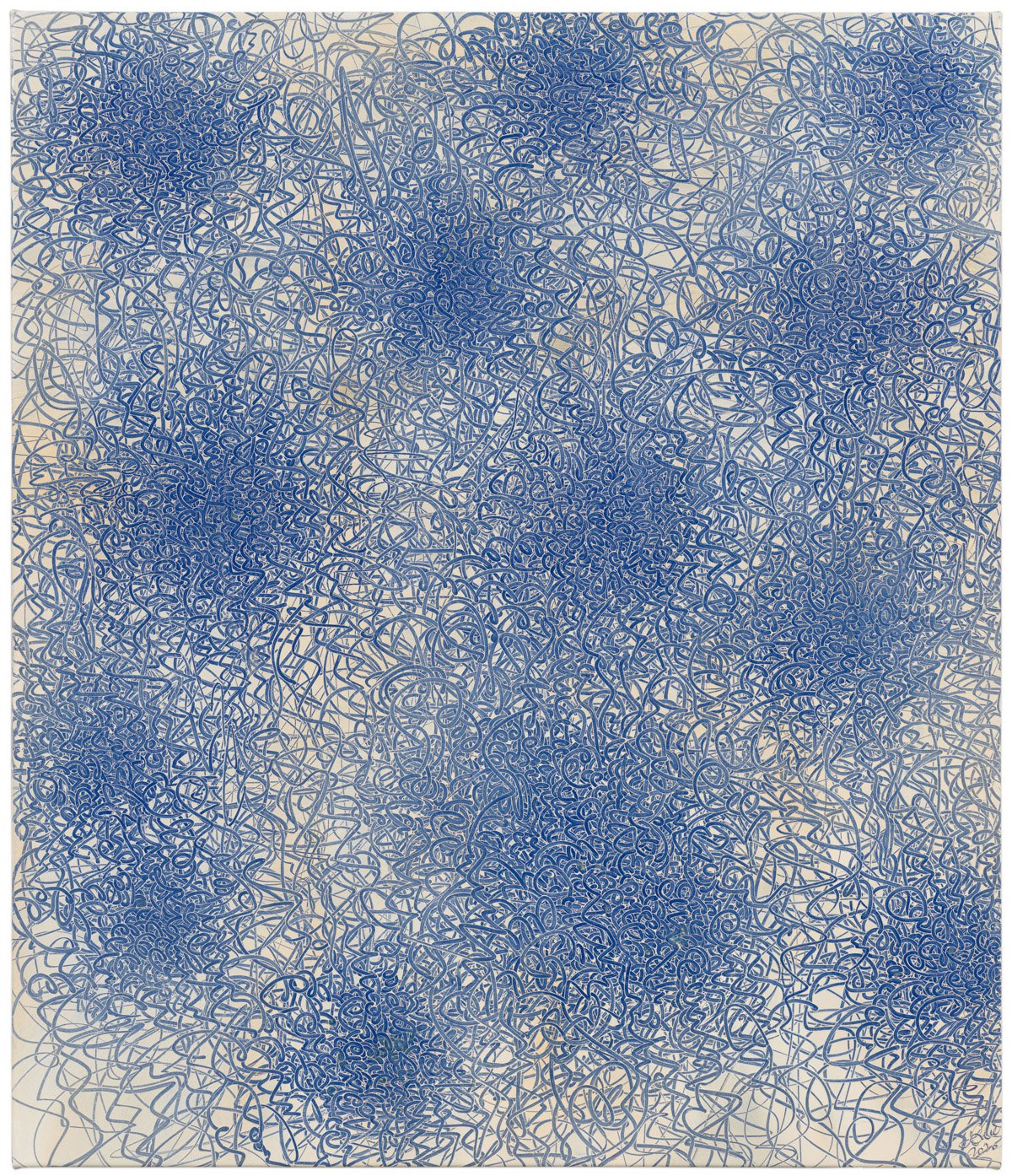 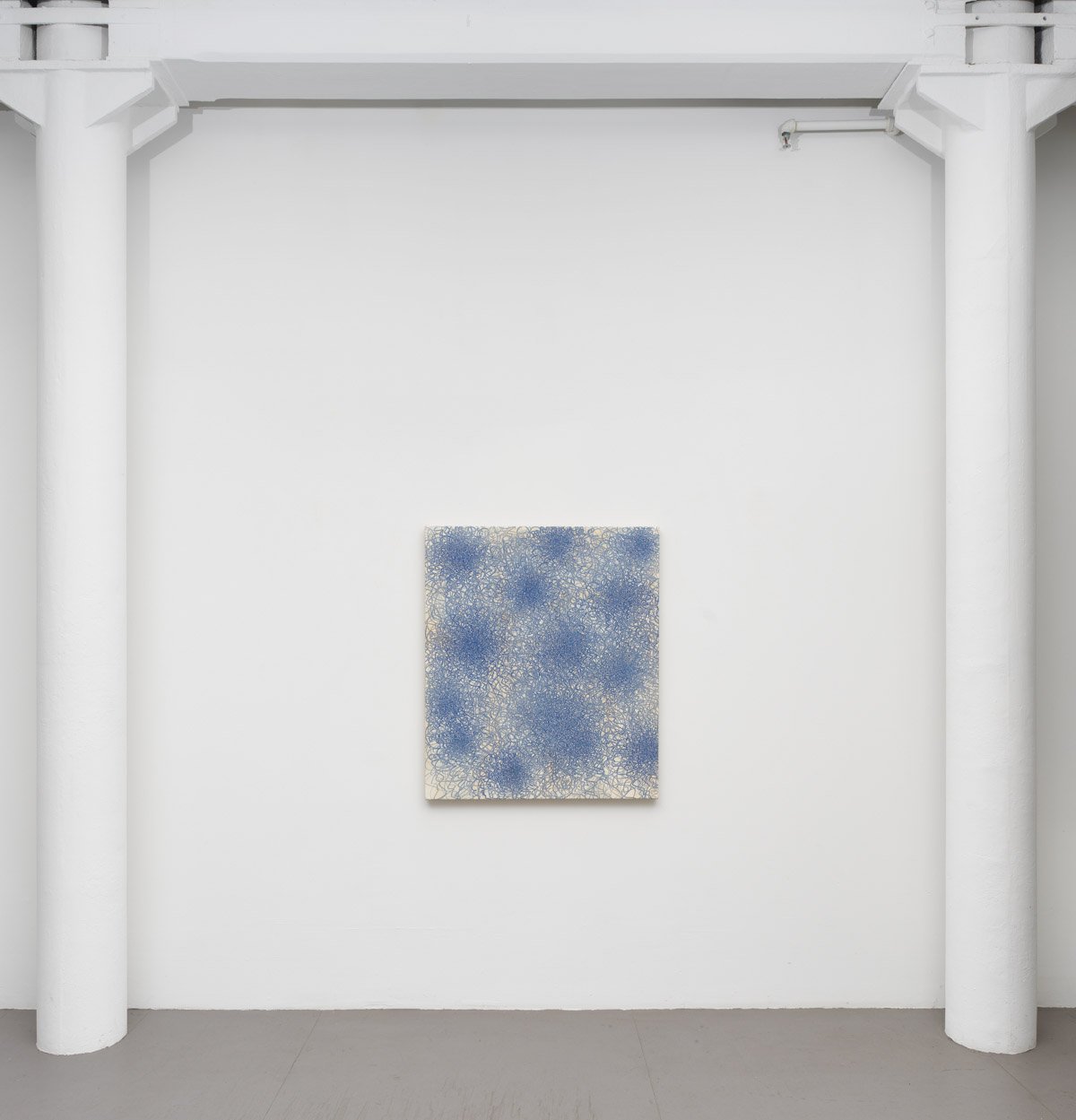 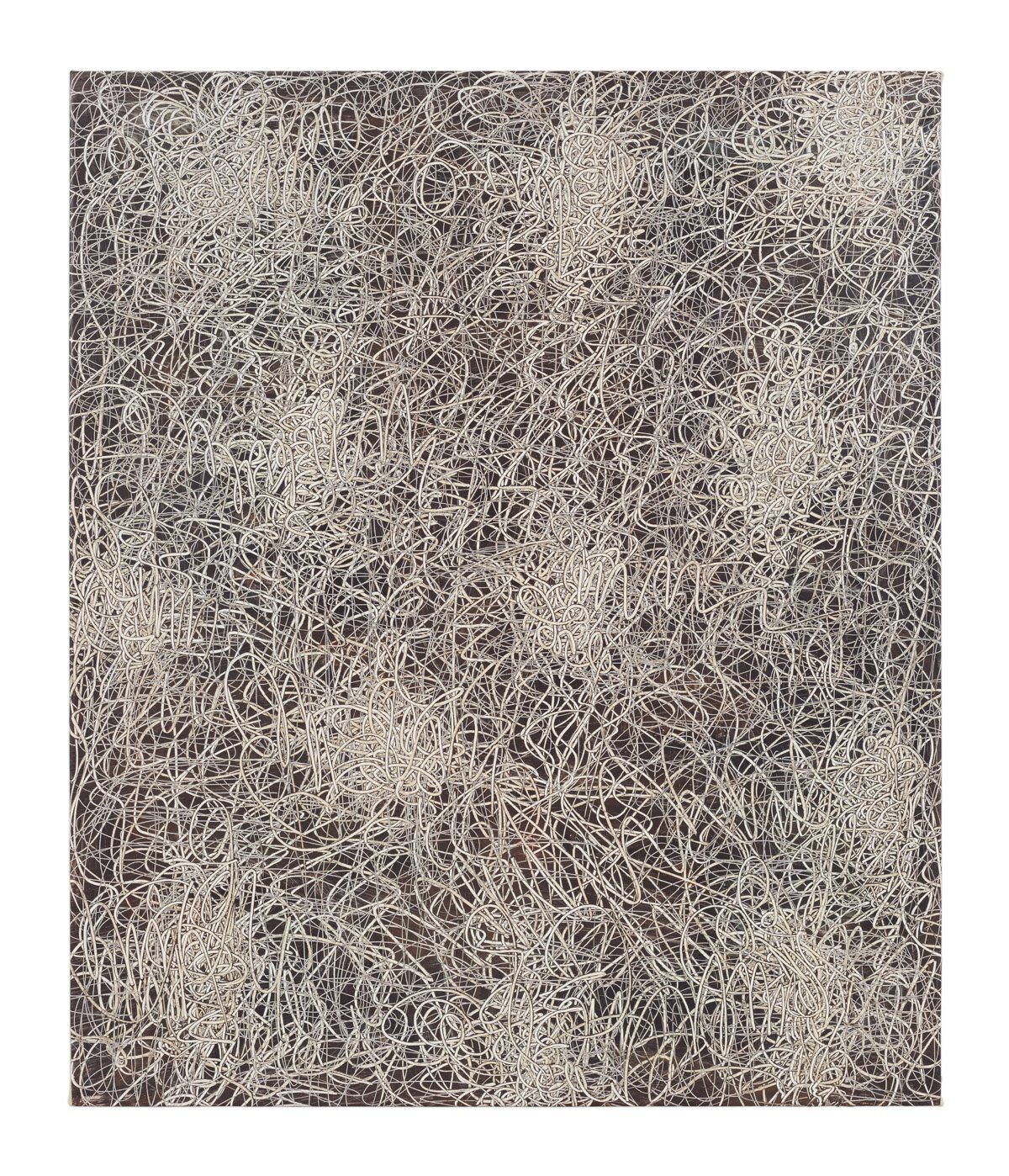 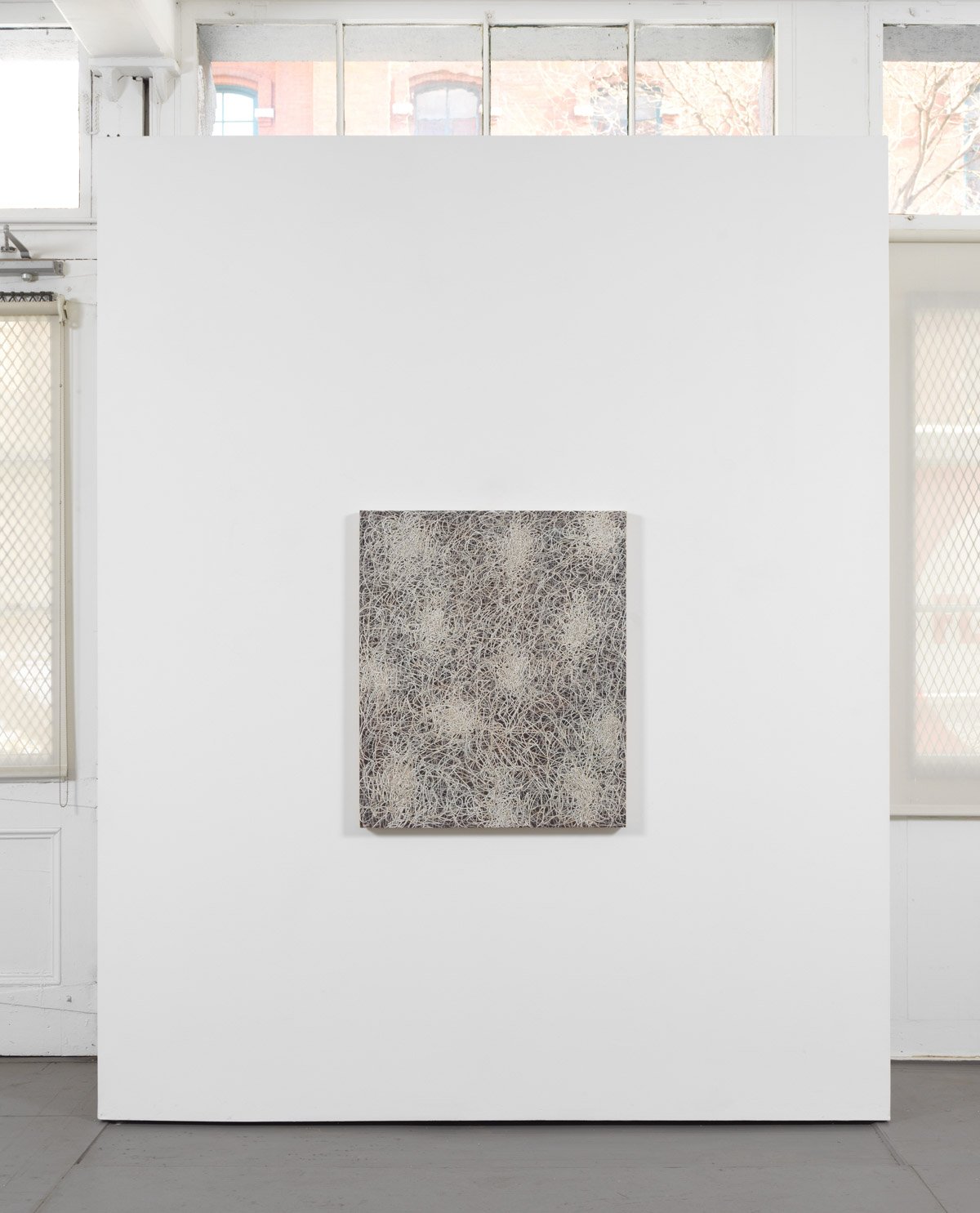 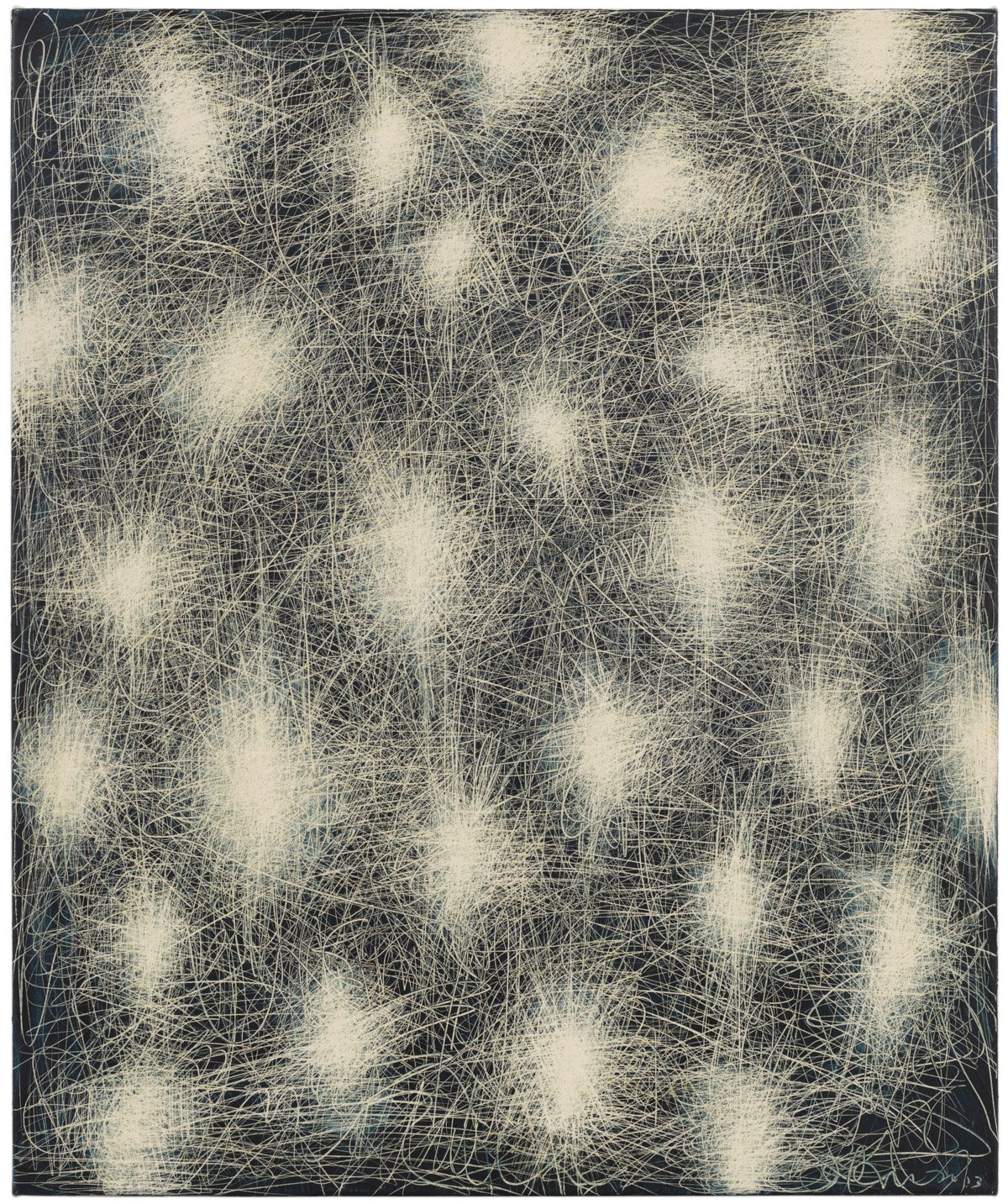 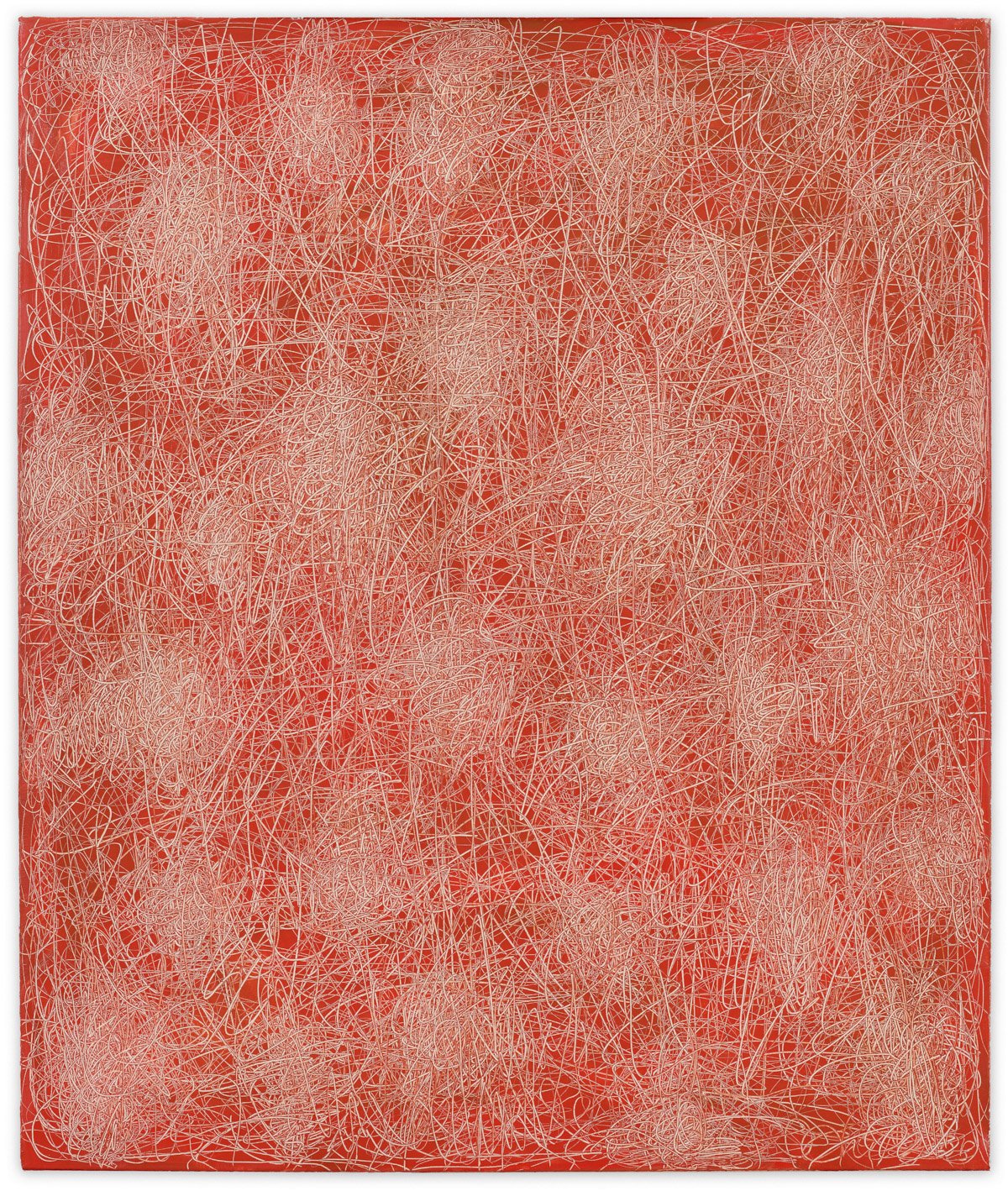 For additional images and to arrange your visit, please contact api@artprojects.comor 212-343-2599.

The exhibition presents paintings selected from an important body of work Lee has been developing over the last ten years, most on view for the first time. These acrylic and oil on canvas paintings feature his approach of incising a top layer of paint with line to reveal a bottom layer of ground. Lee’s signature lines travel the canvas edge to edge and are concentrated at intervals to create fields of edgeless forms that are intrinsically complex in their creation, variety, and interconnection. Importantly, these paintings have a parallel history with Lee’s well known ballpoint pen work and share the distinction of tracing their lineage to Lee’s early mature style of the 1980s.

Many know the accomplishment of Lee’s celebrated ballpoint pen works on paper and on canvas; these works range from the small to the very large, and with them he pushes the simple ballpoint pen to its limit, creating expanses of line and ineffable form, or monoliths, or atmospheres of subtle delicacy.  For forty years, Lee has explored the potential of the ballpoint pen, sometimes altering the pen itself to change the quality of a line and always engaging in a demanding process that allows him to repeatedly defy any limited expectations one might have for the ballpoint pen pigment as medium. The paintings of this exhibition are inextricably linked to this history. For these paintings, the ballpoint pen remains as a tool and the medium has become paint. Those with a long memory of Lee’s career will also recognize how the key forms—fields of tangled, bursting concentrations of energetic lines—and the process of their creation—of rapidly incising line through a layer of paint—have connections to paintings from 1982, for which a nail was the tool, and to the ballpoint pen drawings Lee was making at that time. In the “nail paintings,” the line drawn by zipping the nail through paint was quite similar to his ballpoint pen line and indicated the moment Lee broke from other painting approaches and began to make paintings that were clearly of his own language.

When Lee more fully pursued this approach to painting in the early 2010s, he did so to create work for an exhibition of his work at The Metropolitan Museum of Art in 2010 and then in preparation for an exhibition in Korea in 2012 (a kind of homecoming show for the expatriate artist). Of course, Lee is clearly a New York artist, but as a youth in Korea in the 1960s and 1970s, he studied with artists associated with Dansaekhwa—the now widely appreciated post-Korean War “one color” or monochrome painting movement. In 1977, Lee would come to New York to continue his studies and find his own path, but in looking at how Lee developed his particular approaches to painting and drawing, it can be productive to consider his early close connections to some of the major practitioners of Dansaekhwa and, equally important, to consider that his early development as an artist in Korea took place during a period of austerity and autocracy.

Using this lens, one can certainly see Lee as a producer of  monochromatic paintings and drawings, but more interesting is to see how Lee, after arriving in New York—in large part through working with ballpoint pens—developed his own means of aesthetic investigation and related processes that, when viewed in retrospect, point not only to modernist traditions he encountered in his earliest formative years but also to his formal and informal study of contemporary and historical work, Rembrandt famously included, that was part of his New York education. Lee’s investigations have since inspired others, including being the impetus for the exhibition Extreme Drawings:Ballpoint Pen Drawing Since 1950 at The Aldrich Contemporary Art Museum in 2013. Ultimately, he brought into a focus an art for the 21st century which is neither tethered to the geographies of its origins nor fully emancipated from the traumas of the past or the present.

The ballpoint pen lines become incised lines and the fields of forms in Lee’s drawings become fields of similar forms in the paintings of the early 2010s. A recent painting, at just shy of 7 x 9 feet, TW-1801 of 2018 presents scores of forms. Energetically, fluidly, indomitably, Lee carves the dark oil surface and manifests line and form by revealing light ground. The tension maintained in the painting is in no small part related to Lee’s ability to adhere to a demanding, specific process while also quickly reacting intuitively as lines are speedily drawn and form emerges. Highly contrasted darks and lights give the work its impact, but it is not monochromatic.  Amidst the light lines, reds and yellows announce themselves and these along with a pronounced blue area in one corner make clear that this painting is also about color. Even with Lee’s ballpoint pen work and as with TW-1801, one realizes that though line and form may be in the foreground of any discussion, the consideration of color is not tertiary.

With some paintings, see WB-1206 and WTB-1201 of 2012, a light surface, rather than dark, is painted over a dark ground, rather than light, and now the incisions reveal dark lines and dark forms. These paintings bring the viewer more directly back to Lee’s works created with ballpoint pens, dark lines on a white ground, but here the physicality of the paint mutes the sharpness of the dark line, and the line and forms are softer. In the recent work TW-1903 of 2019, the line itself has undergone an alteration. It still dances, but it is thicker, and its impact is unexpectedly dramatic. In Lee’s hands, because of the high refinement of the aesthetic he creates and in which he performs, small changes open up surprising new vistas.

Whether the forms in Lee’s paintings are light or dark, they defy easy description; one might compare them to tangles of yarn or floating wire, perhaps a Ruth Asawa unsprung and imploded. Or, gamboling lines might indicate the electro-magnetic activity of a star or that of a scale more intimate than the solar—products of a high energy machine or perhaps some kind of intelligent massing within our own earth’s atmosphere. Lee hews to his process with such consistency that one might be fooled into thinking the forms are accidents of construction after all, like networks of animal trails viewed in a satellite image suggesting non-representational drawing. But much more is at stake—Lee keeps a steady eye on the intersection of process, media, and durational performance and ends with the record, a painting, brought to conclusion precisely in the state that allows a viewer to feel entranced by a mysteriously attractive manifestation that announces on its surface a simple process that led to its being.

In 2020, during a year of global sequestration, Lee has been working on expanding this body of paintings. His process and his commitment bring words to mind that are charged in today’s world: freedom, difficulty, responsibility, restraint, honesty, study, labor. In the end, the future may know Lee as an innovator in drawing and painting who embraced his own time and claimed his own identity.                               -Erik Bakke

IL LEE (b. 1952 Seoul, Korea. Lives and works in New York) is celebrated for his pioneering work with ballpoint pen that began 40 years ago and continues today. Lee’s work, with its unorthodox media and distinctive style, and artistic contributions have received worldwide recognition. In his recent acrylic and oil works on canvas, Lee offers a counterpoint to his well-known ballpoint pen work and continues his early investigations of materials and process that began decades ago. Lee’s innovative and historically grounded ballpoint pen works were the subject of a critically-acclaimed mid-career retrospective at the San Jose Museum of Art in 2007. Work by the artist is represented in prominent collections, including The Metropolitan Museum of Art, Minneapolis Institute of Art, San Jose Museum of Art, Palm Springs Art Museum, Vilcek Foundation, National Museum of Modern and Contemporary Art Korea, Leeum Samsung Museum of Art (Seoul), and Société Bic (France), among others. 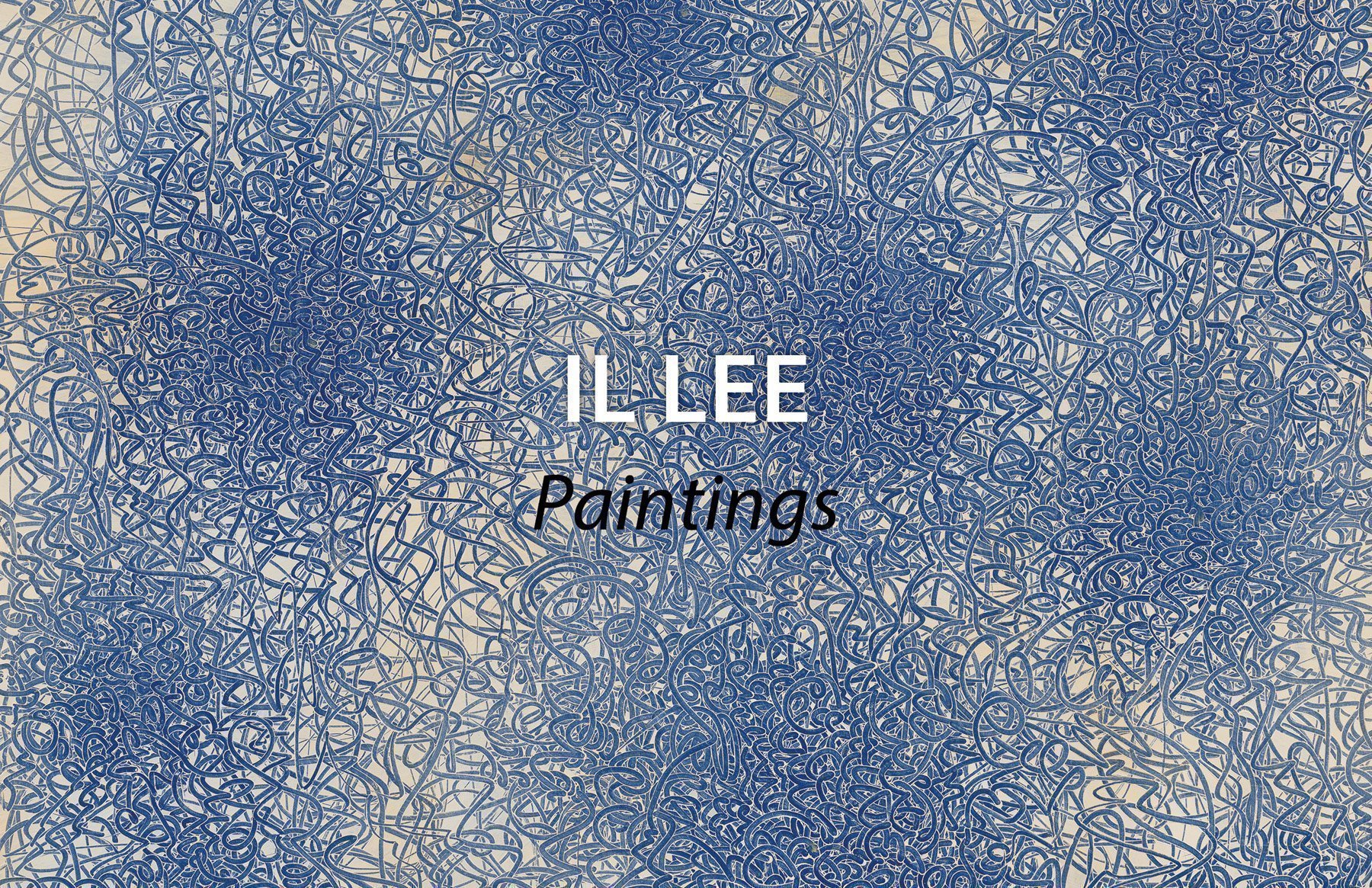