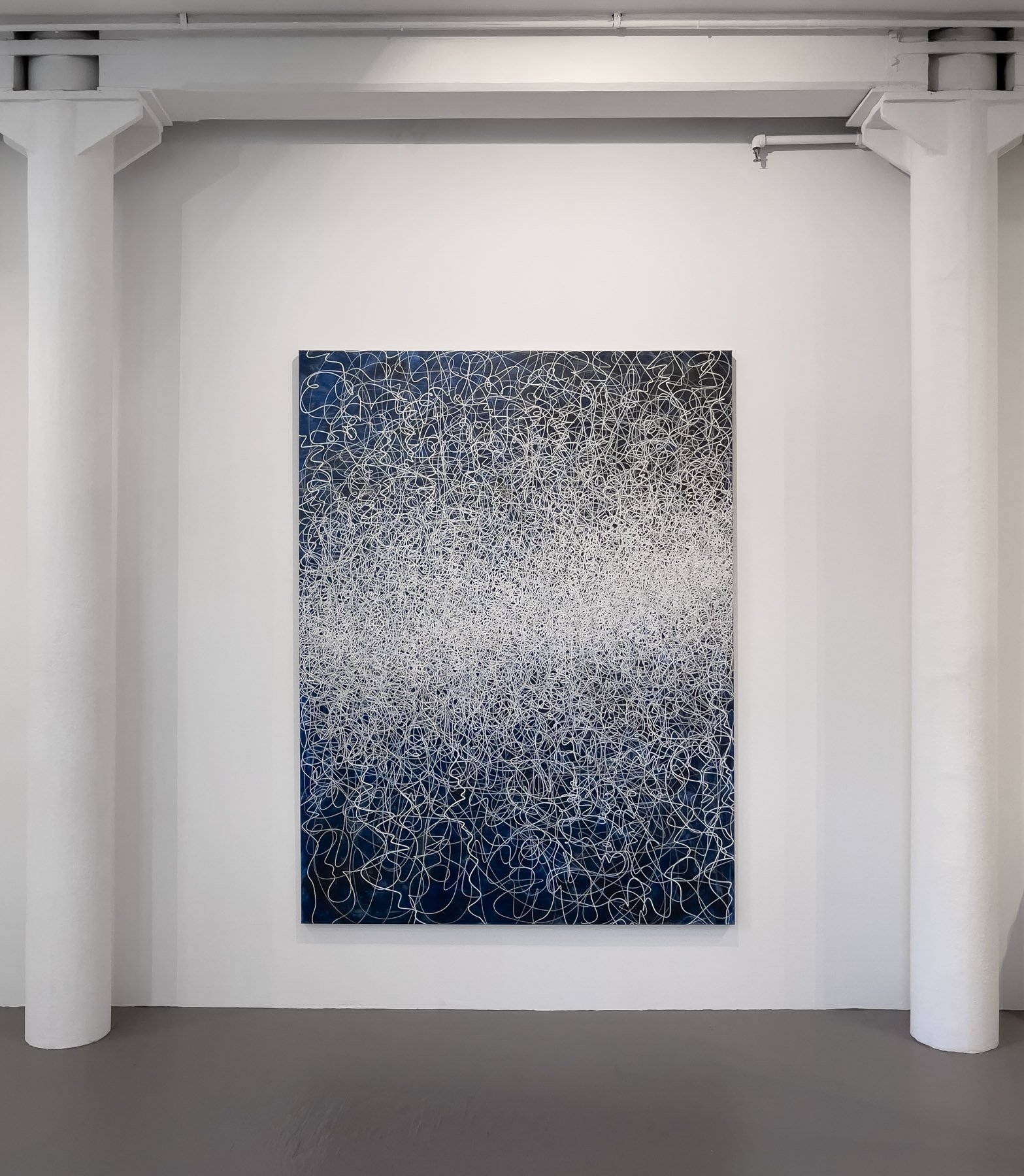 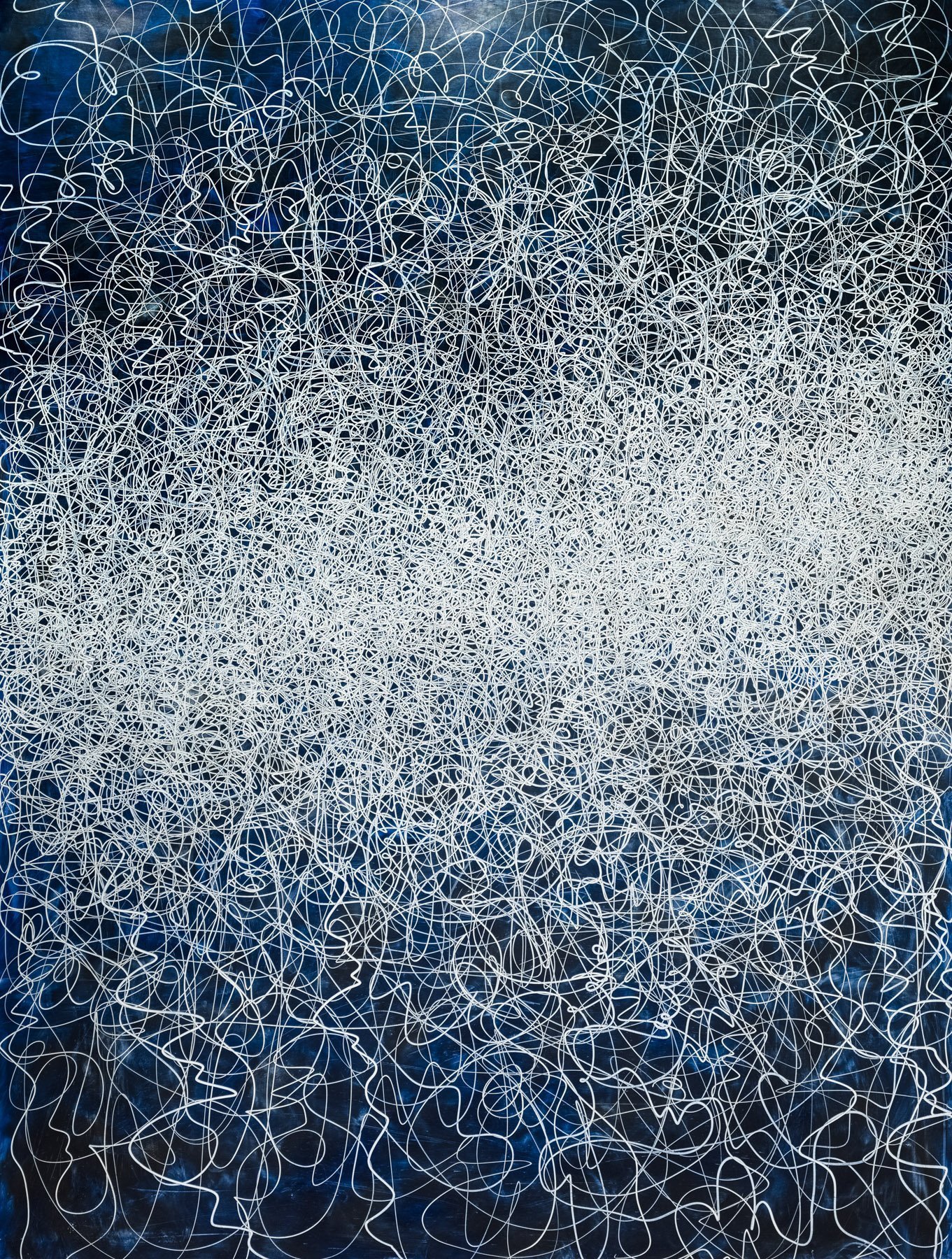 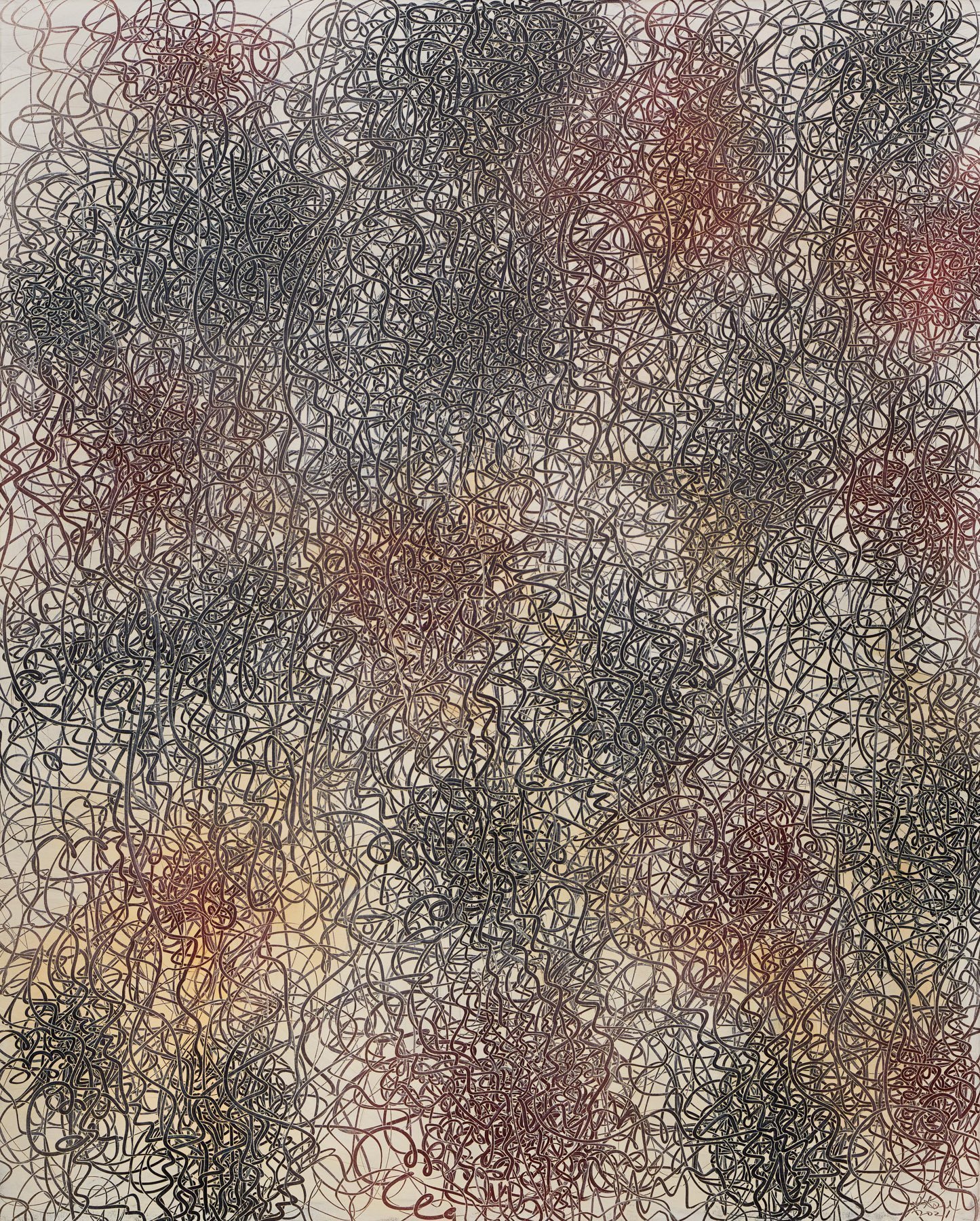 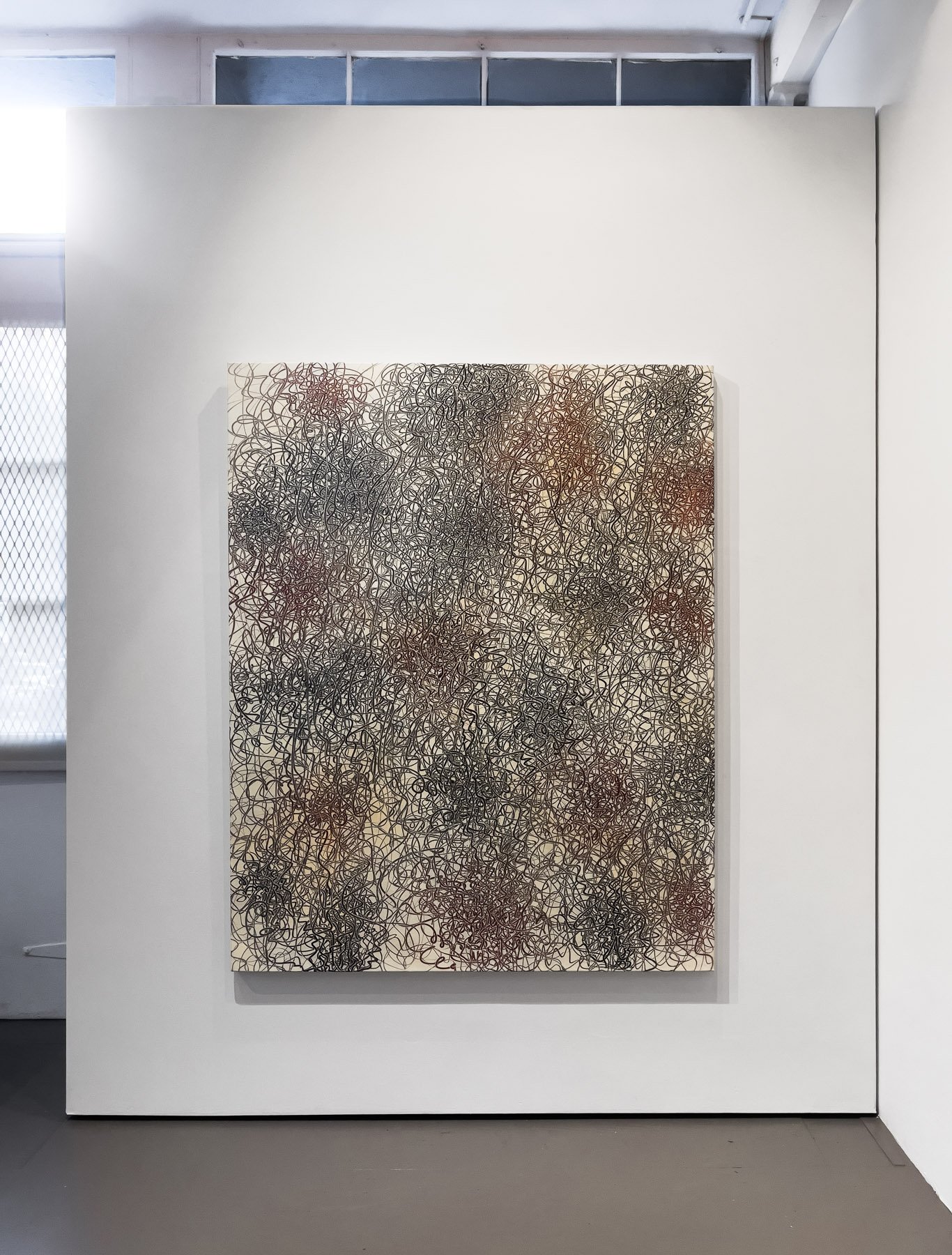 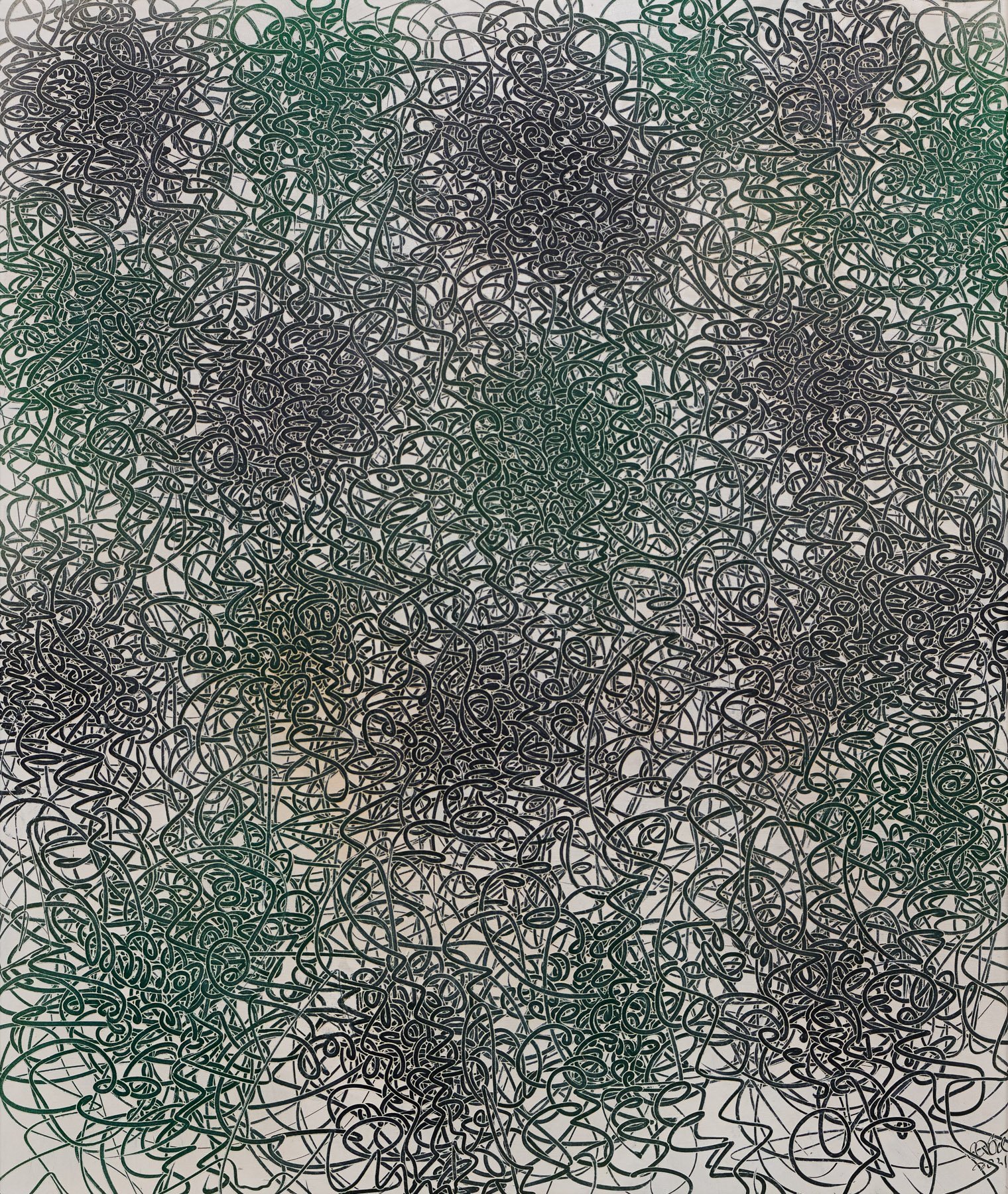 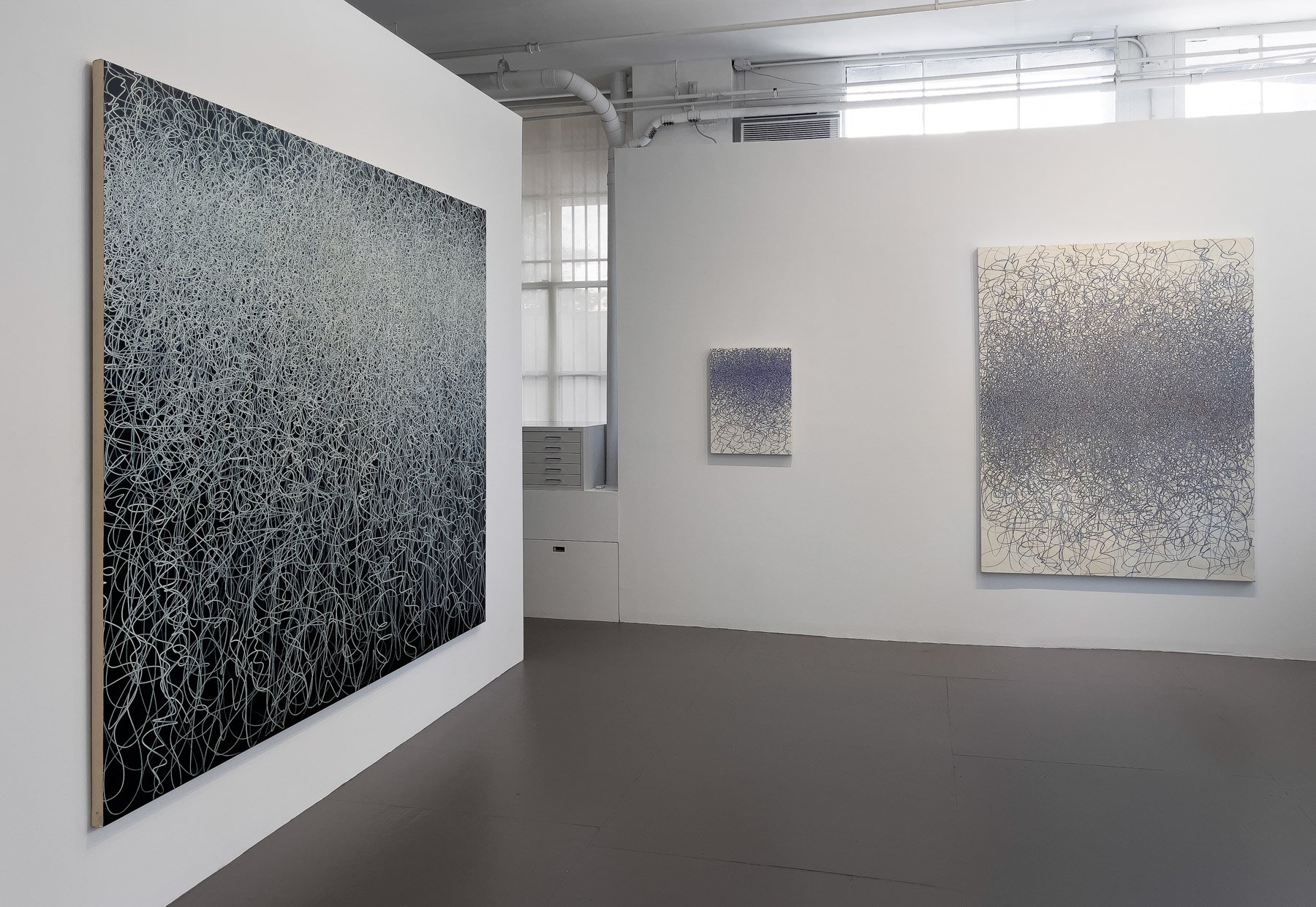 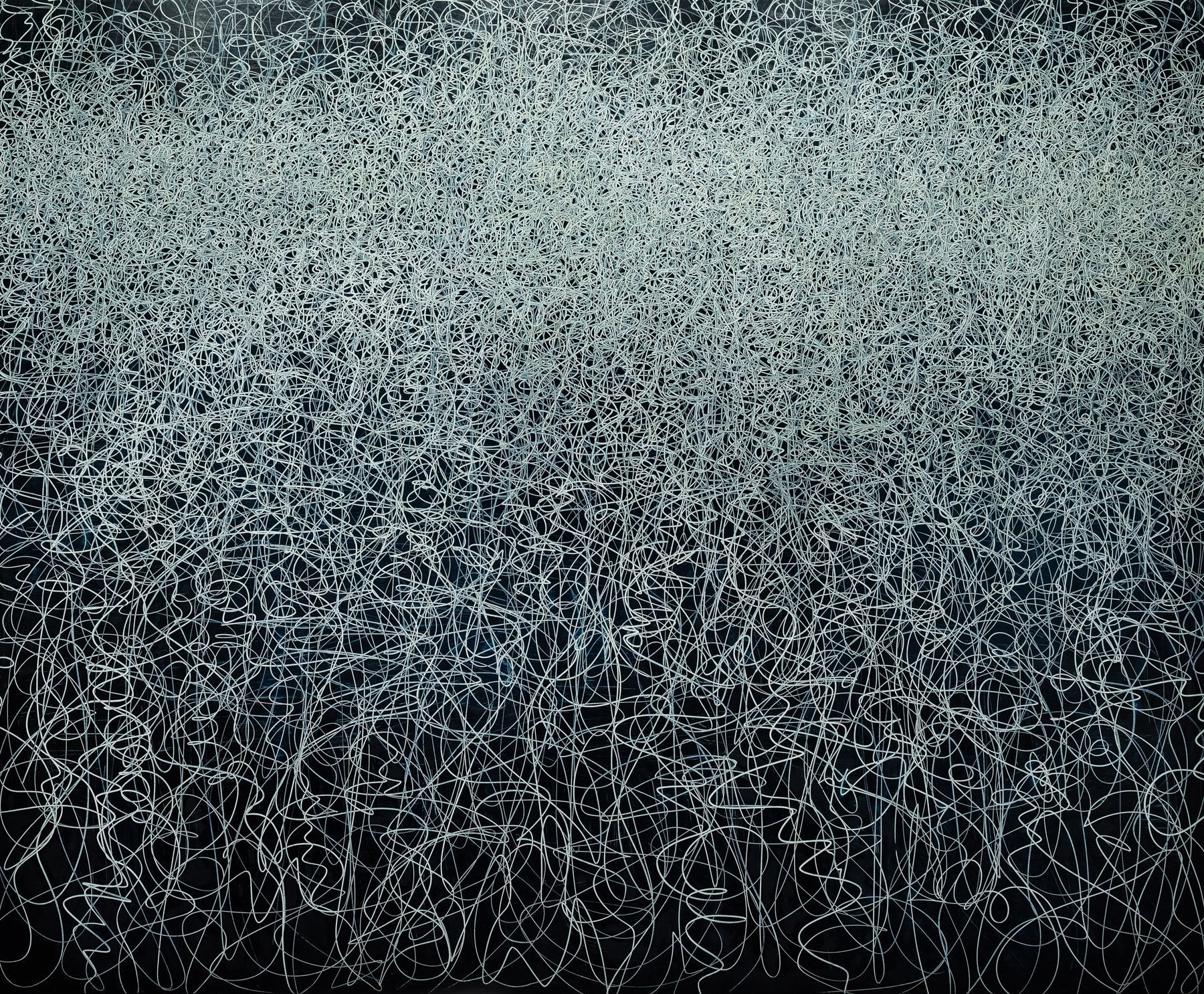 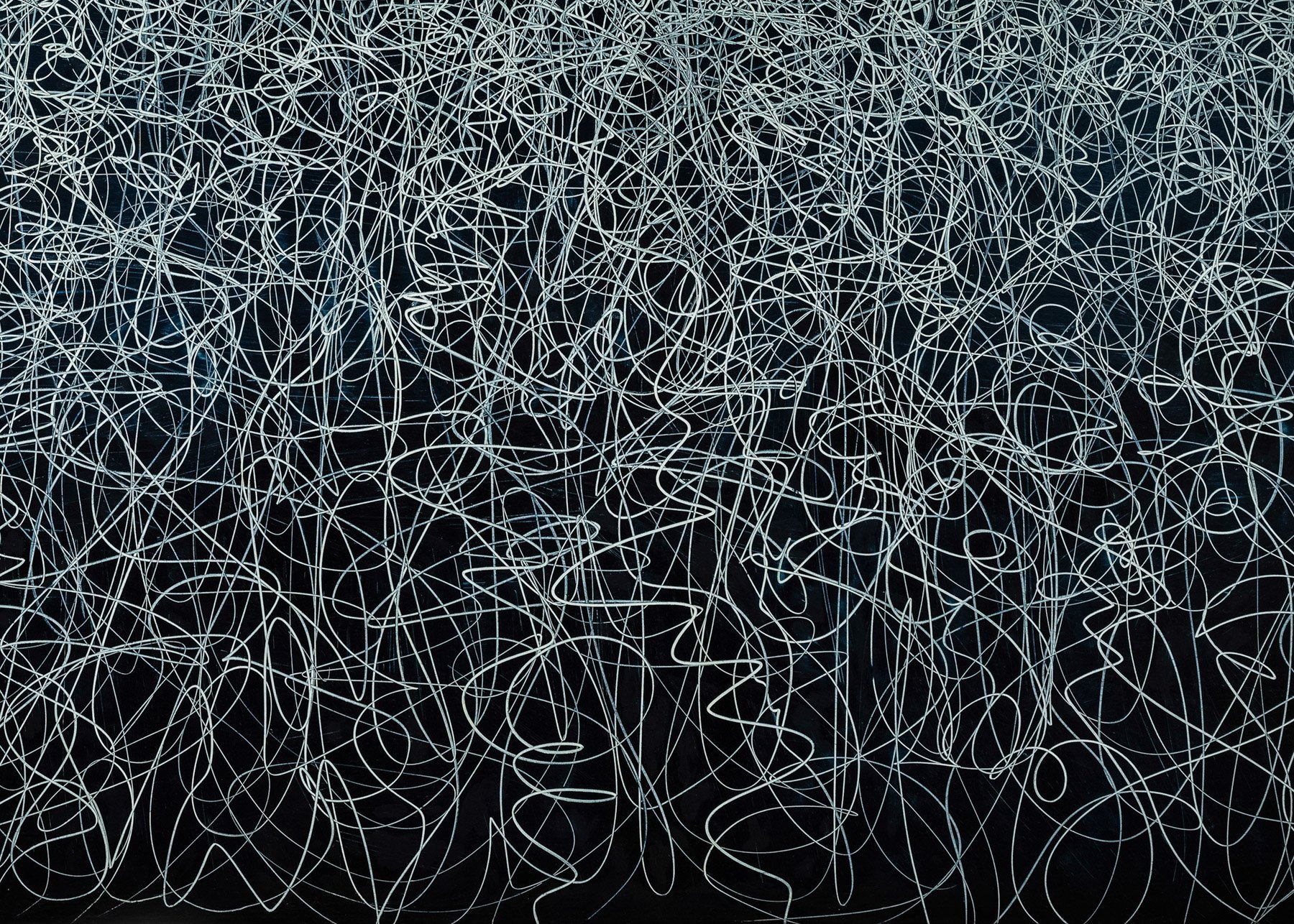 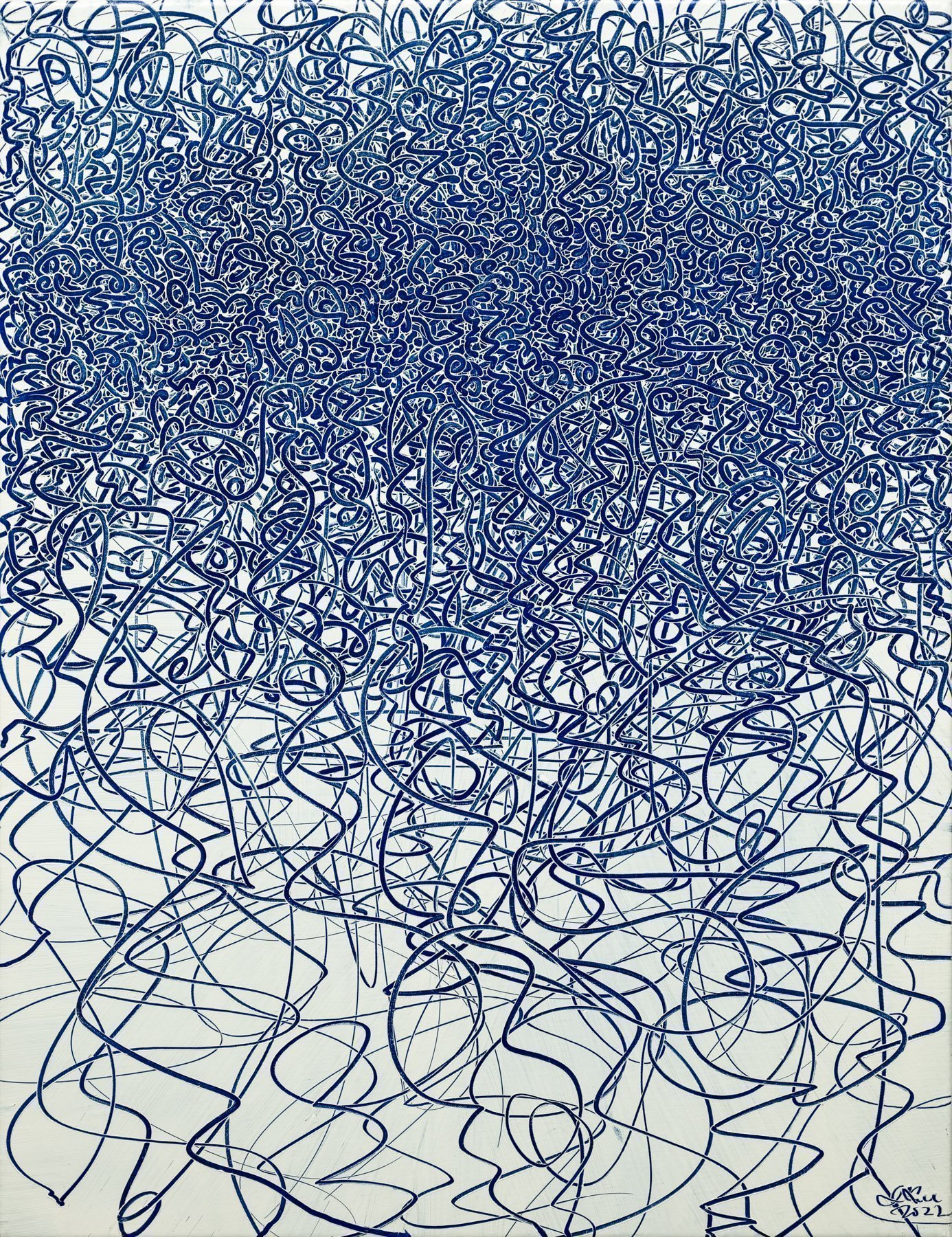 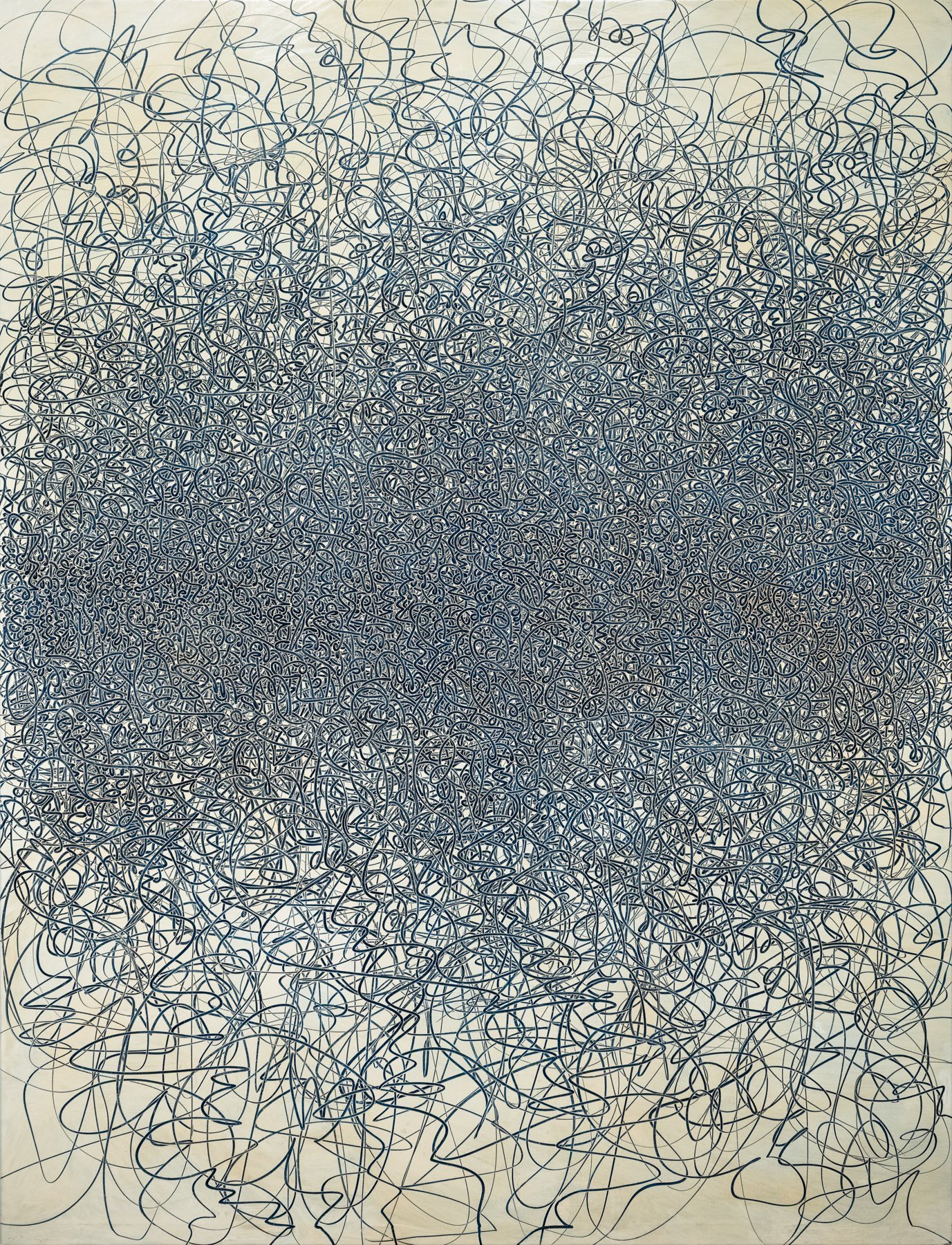 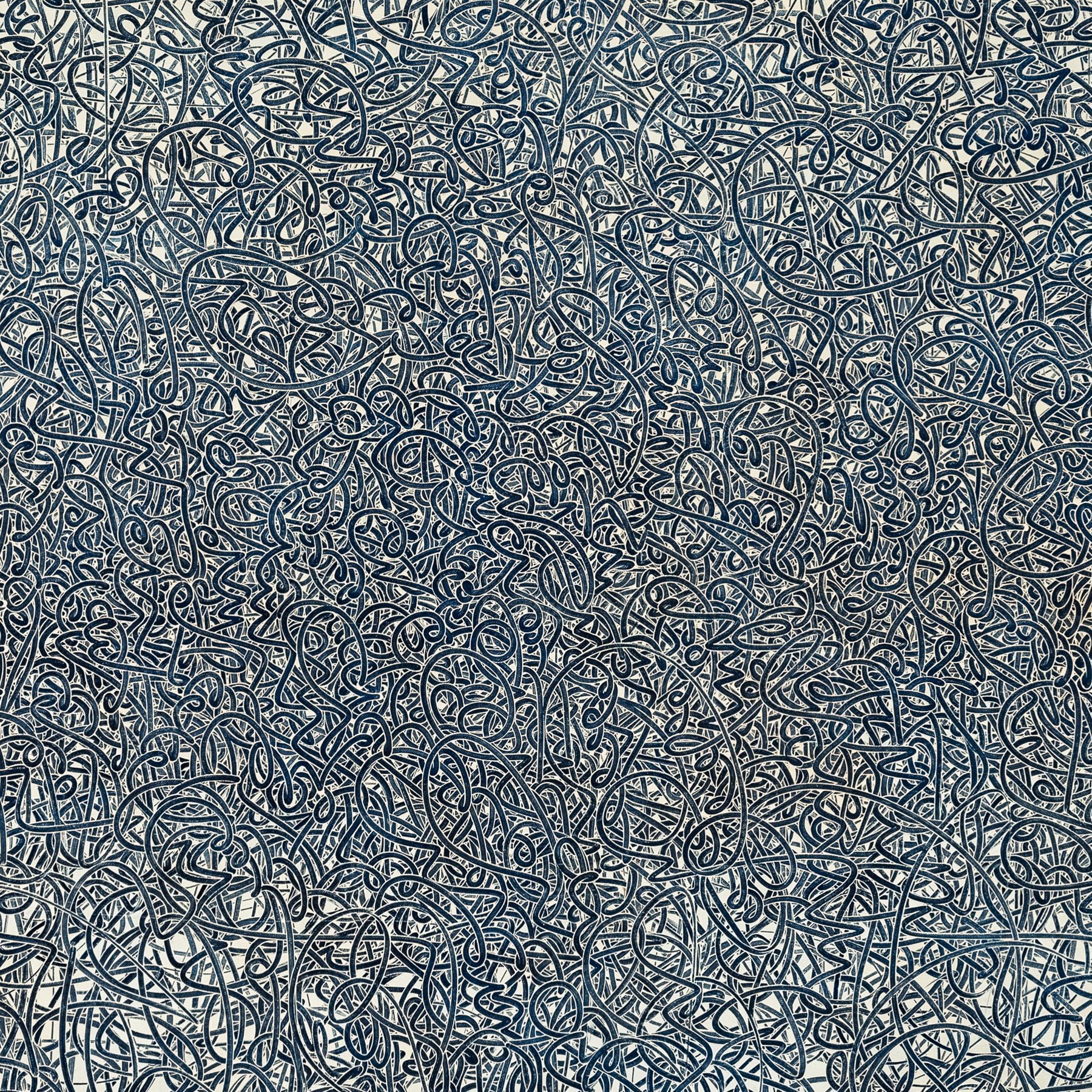 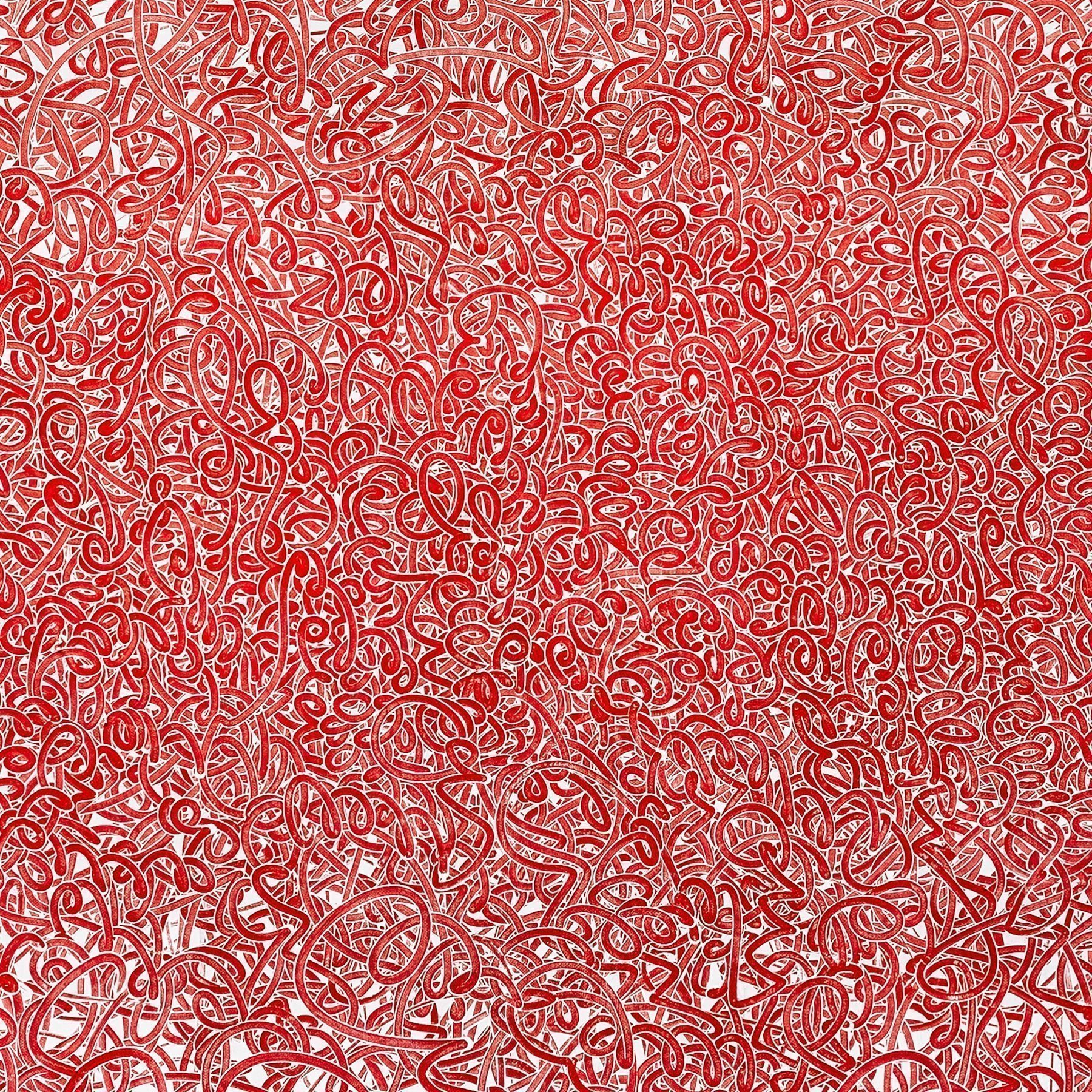 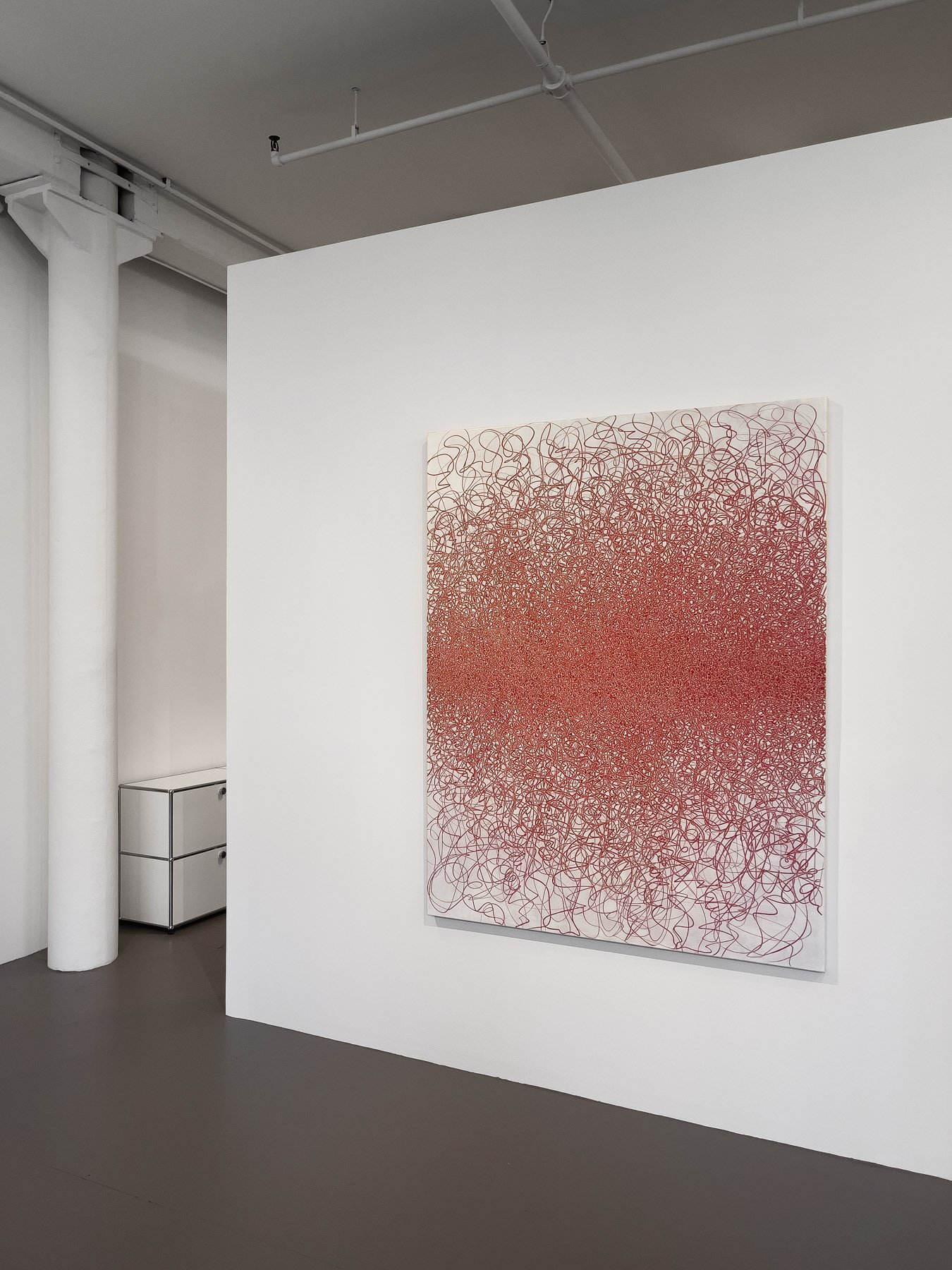 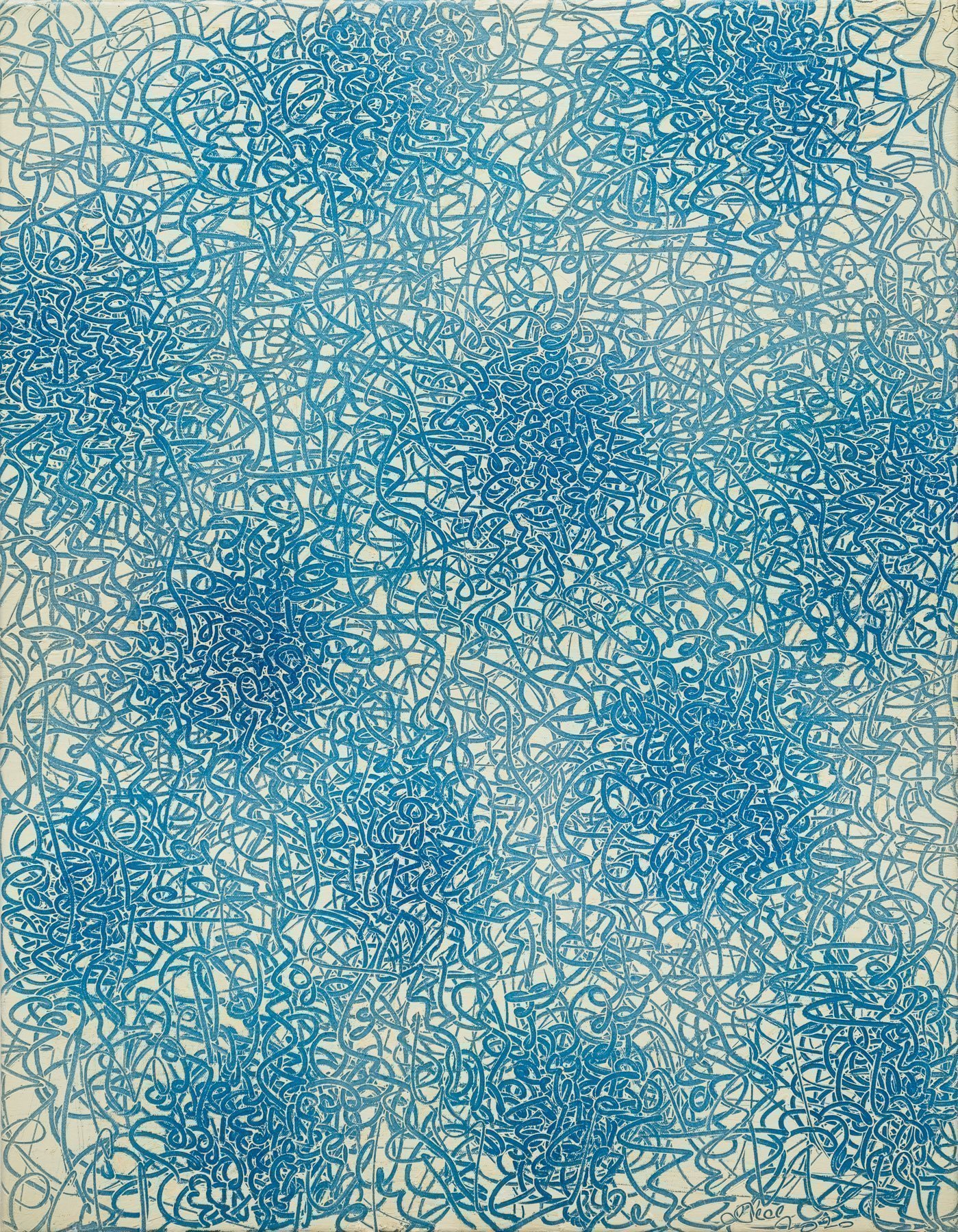 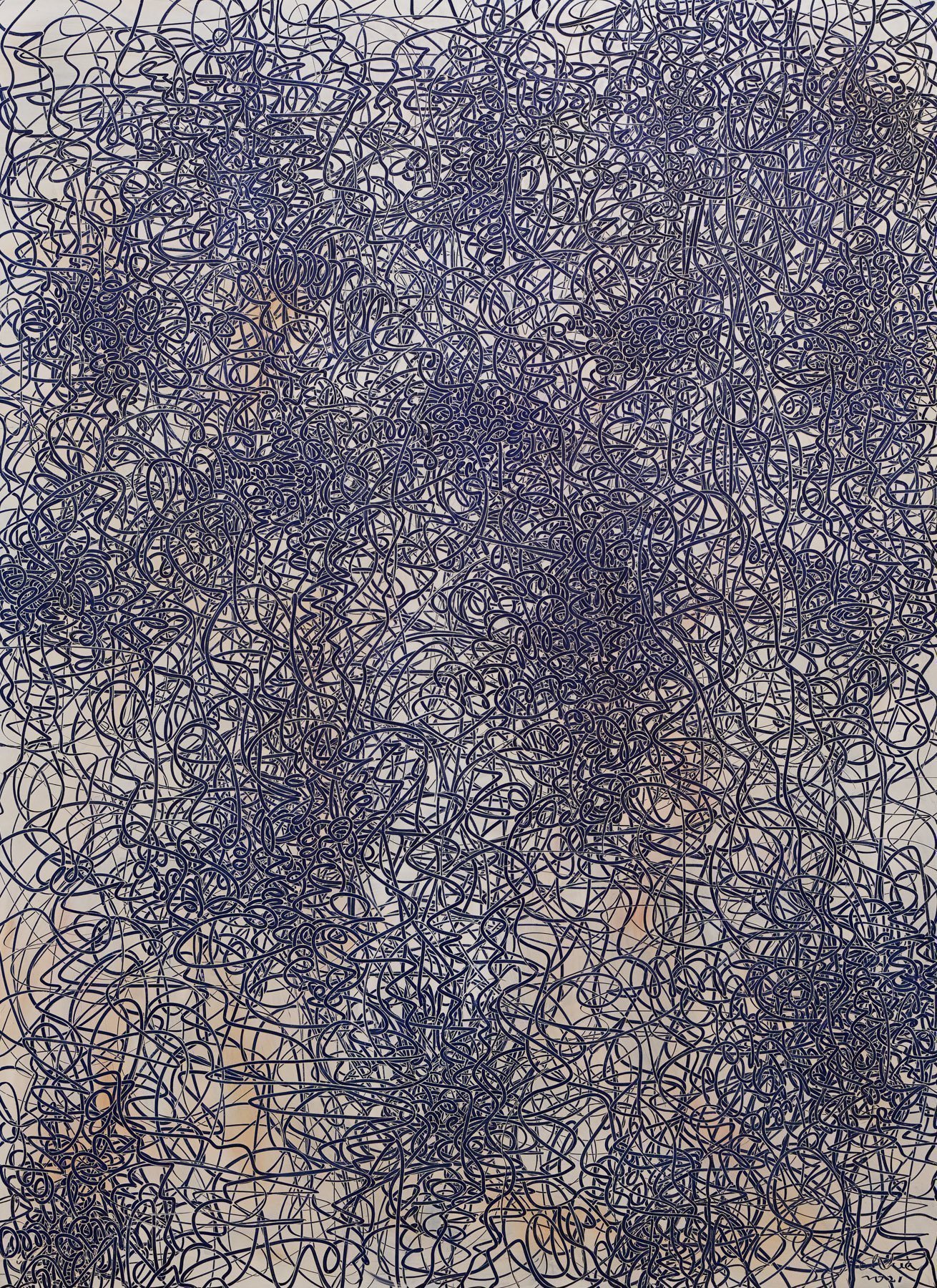 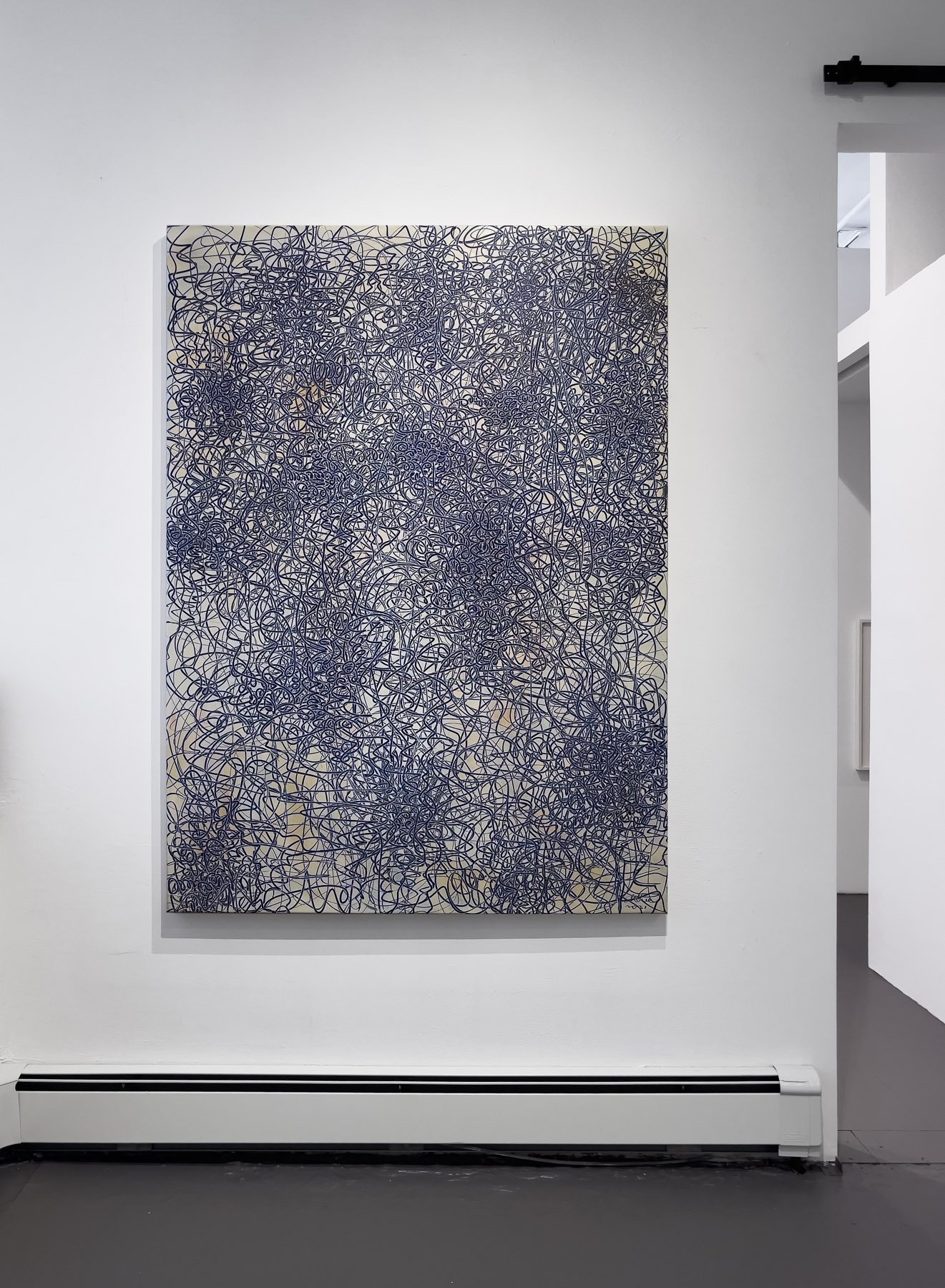 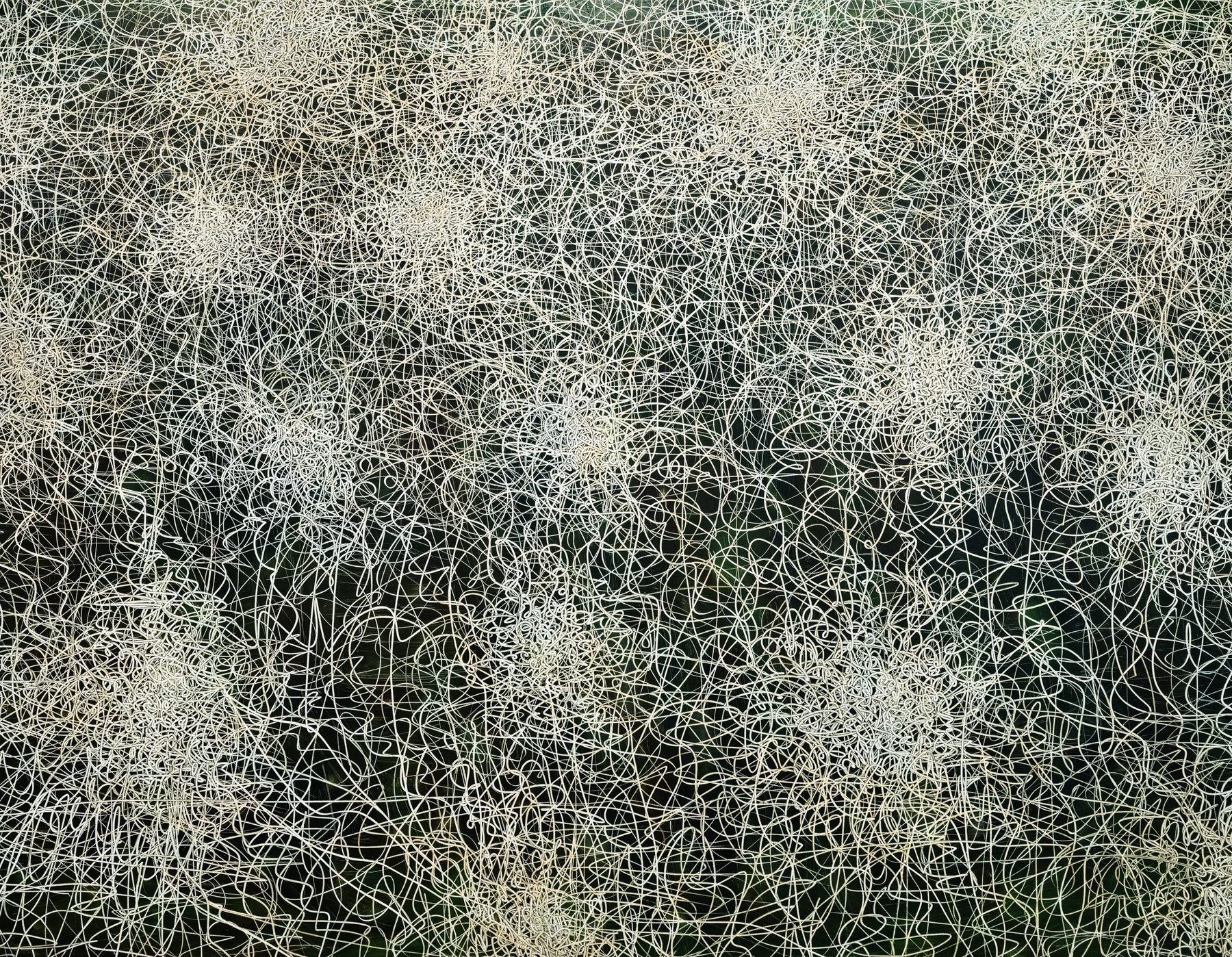 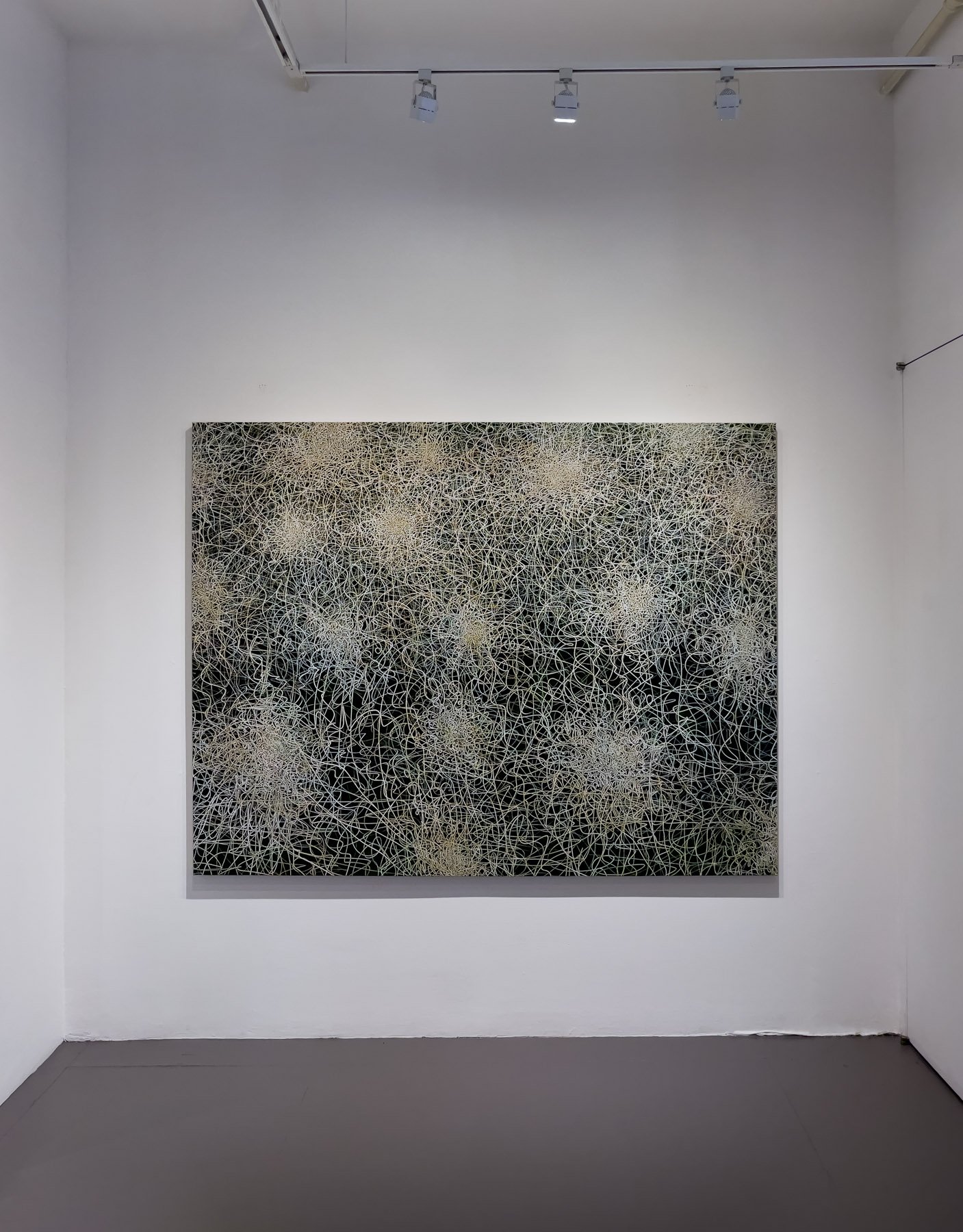 Art Projects International is very pleased to announce Line and Light, an exhibition of ten new acrylic and oil paintings by Il Lee, many completed in 2022. The exhibition will be on view from September 17 – November 19, 2022. Renowned for his non-representational line work, in these recent paintings, Lee speedily carves animated curves through pliant paint to reveal colors below. The entangled lines may create a field of connected forms or a single event.

The indigo of the ballpoint pen, and his performative drawing, has long been associated with Lee’s five decades of studio practice and many of his best known works on paper and canvas. Line and Light also offers viewers a chance to see a stellar example of one of Lee’s larger ball point pen on canvas works BL-071 (2006) in which his unflagging line work creates deceptively simple and enigmatic forms that activate the space of the painting as well as the viewer’s imagination.

This dual sense of activated surface and activated space within and without the painting extend to Lee’s paintings. While the ballpoint pen lines accrete, each of the lines realized in paint redefines the space through which it travels. The process, rather than adding material, displaces paint and gives each line its own individuated border, with some appearing to emanate light. In paint, Lee’s line work may feel faster, more facile and mannered as, on inspection, confident weavings give way to curlicues which may give way to dramatic ur-spirals.

Influenced by the materiality of the paint and Lee’s process, the viewer comes to a strong conclusion that the painting can be entered and that the lines can be understood by traveling among them. Eventually the viewer will step back and realize that the complexity and balance of tensions between line and form, dark and light, surface and depth, and depiction and material prevent the consideration of only one aspect of the work. In the same way the line work of the painting announces itself, the fields of multicolored forms, like in WMC-2101, or a single dominating form, like in BLW-2201, echo those of earlier ballpoint pen works. Further, perhaps it is Lee’s unwavering dedication to his process that allows small changes in his work to appear as seismic shifts. In Lee’s carefully considered universe, the tight lush curling lines defining the monochromatic, nonrepresentational circular forms of the painting WMC-2102 seem from a different galaxy than the weaving lines in paint that create and then radiate above and below the singular shape in IW-2201.

Lee’s rigor allows each painting and each series to make overtly manifest any changes in process or conception. But Lee isn’t a formalist tweaking this and that to court difference; his energetic return again and again to pursue and perfect the representation of a notion or to pursue and perfect a process that results in a representation makes him more of a very active dreamer. It might be said that each line drawn or excised in paint expends his energy in pursuit not of an ideal form but of foundational or perhaps poetic truth–one he and we can only glimpse beyond the scrim of his uncompromising constructions of material, line, and form. Whether in paint or ink, Lee’s work offers the viewer an experience outside of language that in return only demands careful observation.

IL LEE (b. 1952 Seoul, Korea. Lives and works in New York) is internationally celebrated for his pioneering work with ballpoint pen and a storied career spanning nearly five decades. The significance of Lee’s artistic contributions, use of unorthodox media, and singular sensibility have received worldwide recognition. In his recent acrylic and oil works on canvas, Lee offers a counterpoint to his well-known ballpoint pen work and continues his early investigations of materials and process that began decades ago. Lee studied painting in the 1960s and 1970s in Seoul before moving to New York in 1977, earning an MFA that culminated in a thesis on the Italian Futurists. Lee’s presence in New York as an artist was established when his first ballpoint ink drawing was shown at the Brooklyn Museum in 1981. Lee’s first solo exhibition at Art Projects International in 1997 presented a groundbreaking, in-depth survey of ballpoint ink drawings on paper from 1984 to 1996. Lee built on his international reputation with his critically acclaimed 2007 mid-career retrospective at the San Jose Museum of Art in California. Notable museums and institutions exhibiting his work include The Metropolitan Museum of Art, The Aldrich Contemporary Art Museum, Minneapolis Institute of Art, Vilcek Foundation, Palms Springs Art Museum, Queens Museum Art, Crow Museum of Art, Arkansas Museum of Fine Arts, Smithsonian Museum of Art, Brooklyn Museum, and National Museum of Modern and Contemporary Art, Korea. Work by Il Lee is represented in prominent collections, including The Metropolitan Museum of Art, Minneapolis Institute of Art (Mia), Los Angeles County Museum of Art (LACMA), San Jose Museum of Art, Palm Springs Art Museum, Vilcek Foundation, National Museum of Modern and Contemporary Art Korea, Leeum Samsung Museum of Art (Seoul), and Société Bic (France), among others.

For additional information and images and to arrange your visit, please contact api@artprojects.com or 212-343-2599.